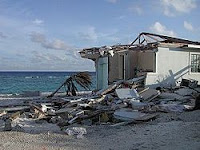 The role of the JCPC is explained on the court's website.  Although the JCPC's role has declined, it remains the highest court of appeal for several countries, as well as the United Kingdom’s overseas territories, crown dependencies, and military sovereign base areas. Since most of the court's jurisdiction is external to the UK, its decisions do not strictly-speaking bind the English courts but they are persuasive precedents.  The composition of the JCPC naturally gives its decisions a high legal authority since its permanent judges are also the Justices of the UKSC though others occasionally sit.

A very interesting
and potentially important recent decision is Crawford Adjusters v Sagicor General Insurance (Cayman) Ltd [2013] UKPC 17 - Lord Neuberger, Lady Hale, Lords Kerr, Wilson and Sumption.  The facts of the case arose from the damage caused by Hurricane Ivan in 2004 when it struck Grand Cayman and extensively damaged a residential village insured with Sagicor.  Restoration works commenced under the supervision of a local chartered surveyor.  The project was reviewed by a loss adjuster who had a history of animosity towards the surveyor.  Ultimately, actions against Sagicor arose including allegations of abuse of process and malicious prosecution.

The abuse of process claim was unanimously rejected by the JCPC.  It was not alleged that the legal process was used forany purpose for which it was not designed, and such an allegation could not have been made out on the facts. The claim for malicious prosecution succeeded on a 3 to 2 majority.  (The minority were Lords Neuberger and Sumption).

The majority considered that the common law originally recognised that the tort of malicious prosecution extended to both civil and criminal proceedings.  Wrongs should be remedied.  There was no evidence that the tort deterred the honest bringing of litigation or that it leads to interminable litigation.  The requirements to demonstrate both malice and the absence of a reasonable or probable cause for the launch of proceedings present formidable hurdles to prospective claimants.  Further conditions were not required.

As the Law Society Gazette (15th July) points out:

'To depart from the previous position in relation to malicious prosecution is a radical step and inevitably a calculated risk – if the majority are correct, parties will have an important weapon in achieving justice against those who institute proceedings with malevolent intent. The alternative and less desirable possibility is that unsuccessful claimants will find themselves faced with the prospect of expensive and protracted satellite litigation, and that the action will be used as a threat with which to deter parties from bringing meritorious claims.'

Only time will tell which of these competing viewpoints is correct.   Of course, it may be that the decision does not survive IF a similar matter ever reaches the UKSC.  That might depend on the composition of the court and judicial opinion is divided.  However that may be, it seems right in principle that the law should offer a remedy to those harmed by the deliberate misuse of litigation.
Posted by ObiterJ at Wednesday, July 17, 2013