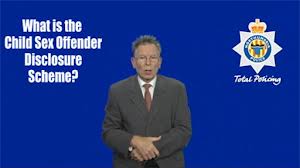 The claimant (X) had convictions in 1990 of indecent assault on a child and in 1996 for 4 further similar offences.   X was placed on the Register of Sex Offenders and will remain on it for life, subject to being able to make from 2013 an application for removal under the new legislative provisions which came into force on 1 August 2012.

At the end of March 2010, the defendant (the Home Secretary) promulgated the CSOD Guidance.   The scheme became available for voluntary adoption by any Police Force in England and Wales from 1st August 2010.    The scheme enables members of the public to ask the police to provide details of a person who has some form of contact with children with a view to ascertaining whether that person has convictions for sexual offences against children or whether there is other relevant information about him.

South Yorkshire Police adopted the CSOD Guidance in February 2011 and they wrote to X to inform him that the scheme might affect him.  X brought proceedings to have the guidance quashed. He was partially successful in his challenge.  X argued that:

1. The guidance did not recognise the need for the police to consult individual offenders prior to any disclosure

2.  The guidance (in its opening paragraphs) provided for a presumption in favour of disclosure and the guidance did not emphasise the need for a balancing exercise to be conducted prior to any decision to disclose being taken.

The court accepted point 1.  The guidance should have included a requirement to request representations [para 41] and the court said that whilst each case depends on its own facts, it is difficult to foresee cases where it would be inappropriate to seek representations, unless there was an emergency or seeking the representations might itself put the child at risk.

On point 2 - the guidance - on a careful reading - contained a requirement that the Police carry out a balancing exercise taking into account the rights of the sex offender not to have the information disclosed and the need to protect individual children from harm.

The guidance was not quashed since to do so might bring the CSOD Scheme to a temporary halt, it would be disproportionate and risk harm to children to declare the CSOD Scheme unlawful and quash it.

A reading of the judgment is instructive because the court considers the common law and various protective measures for children which are available.  The court concluded with a plea:

"there would seem a great deal to be said for producing one document dealing with the disclosure of the convictions of and other information about a sex offender. What is needed is practical guidance covering the various schemes. There is much less of a risk of the right process not being applied if there is one document which carefully explains the circumstances in which each scheme should be used and provides for more "joining up" of the schemes. We would also observe that it should be possible to do this in a much shorter form than the current guidance."

Legal materials have an unfortunate tendency to accumulate as amendments are made.

An interesting post on this case is on the Panopticon blog 24th October 2012.