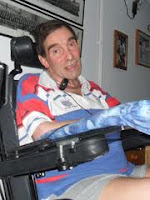 
Addendum 3:  On 22nd August, the death of Mr Nicklinson was announced.  See the High Court's judgment of 16th August and comment in The Guardian.


Addendum 1: See UK Human Rights blog - "British Columbia Supreme Court grasps the nettle in right to die cases"  the author, Rosalind English. comments -   "Whether or not it survives appeal to the Canadian Supreme Court, this deeply considered and humane judgment is an excellent source of comparative, ethical, medical and social material on the question of end of life decisions."

In 2005, Mr Tony Nicklinson suffered a severe stroke which left him paralysed below the neck and unable to speak. He was a very active and outgoing man with a busy and active family, working and social life. He communicates by blinking or limited head movement. Initially, this was only by reference to a board with letters on it but he now also has an Eye Blink Computer.

Earlier this year, in Tony Nicklinson v Ministry of Justice and the DPP [2012] EWHC 304 QB, Charles J heard a motion to strike out an application for certain declarations brought by Mr Tony Nicklinson.  Essentially, Mr Nicklinson is seeking declarations that it is lawful for a doctor to terminate his life, with his consent and with him making the decision with full mental capacity.

At the hearing - (in February 2012) - before Charles J, the claimant's position was that three declarations would be sought:-


1) A declaration that it would not be unlawful, on the grounds of necessity, for Mr Nicklinson's GP, or another doctor, to terminate or assist the termination of Mr Nicklinson's life.

2) Further or alternatively, a declaration that the current law of murder and/or of assisted suicide is incompatible with Mr Nicklinson's right to respect for private life under Article 8, contrary to sections 1 and 6 Human Rights Act 1998, in so far as it criminalises voluntary active euthanasia and/or assisted suicide.

3) Further or alternatively, a declaration that existing domestic law and practice fail adequately to regulate the practice of active euthanasia (both voluntary and involuntary), in breach of Article 2.

Charles J struck out the application for the third of these declarations but permitted the other two to proceed to a hearing which is about to take place.

The respect for the sanctity of human life is deeply embedded in English law - (see, for example, the statement of Lord Bingham in the Pretty case at para.9).  Suicide is not a crime (Suicide Act 1961) but euthanasia (and assisted suicide) are crimes.


" ... the law draws a crucial distinction between cases in which a doctor decides not to provide, or to continue to provide, for his patient treatment or care which could or might prolong his life, and those in which he decides, for example by administering a lethal drug, actively to bring his patient's life to an end. As I have already indicated, the former may be lawful, either because the doctor is giving effect to his patient's wishes by withholding treatment or care, or even in certain circumstances in which ... the patient is incapacitated from stating whether or not he gives his consent. But it is not lawful for a doctor to administer a drug to his patient to bring about his death, even though that course is prompted by a humanitarian desire to end his suffering, however great that suffering may be .... .   So to act is to cross the Rubicon which runs between on the one hand the care of the living patient and on the other hand euthanasia - actively causing his death to avoid or to end his suffering. Euthanasia is not lawful at common law. It is of course well known that there are many responsible members of our society who believe that euthanasia should be made lawful; but that result could, I believe only be achieved by legislation which expresses the democratic will that so fundamental a change should be made in our law, and can, if enacted, ensure that such legalised killing can only be carried out subject to appropriate supervision and control. It is true that the drawing of this distinction may lead to a charge of hypocrisy; because it can be asked why, if the doctor, by discontinuing treatment, is entitled in consequence to let his patient die, it should not be lawful to put him out of his misery straight away, in a more humane manner, by lethal injection, rather than let him linger on in pain until he dies. But the law does not feel able to authorise euthanasia, even in circumstances such as these; for once euthanasia is recognised as lawful in these circumstances, it is difficult to see any logical basis for excluding it in others. "

Charles J pointed out that Mr Nicklinson (the claimant) "must and does accept that he is now inviting the court to cross the Rubicon described by Lord Goff."

Mr Nicklinson's application is bold.  Will the judges, by way of development of the common law, agree to cross the Rubicon?  There is no doubt that the common law develops - usually incrementally - through judicial decisions but there will be strong arguments that this step is one which, if it is to be taken at all, is for Parliament.  Ultimately, Parliament is better equipped than the law courts to analyse all the possible ramifications of altering the law and it may be thought that this particularly applies in such a controversial area.  As Lord Bingham put it in R (Pretty) v DPP [2002] 1 AC 800, the "court has the function and duty of resolving issues of law and is not a legislative body and nor is it entitled to act as a moral or ethical arbiter."  However, on this, see Charles J's judgment at paras. 29-32 where some alternative arguments are canvassed.  In para 32 Charles J comments that there is a "growing majority of the public who support the relaxation of laws on assisted dying."  No evidence is put forward in the judgment to support this statement.  It may or may not be true.  Indeed, it probably is true but how does the judge know whether the statement is correct and is it not for Parliament and not the courts to make such assessments?

A full reading of Charles J's judgment is a good basis for a full understanding of Mr Nicklinson's arguments and the legal hurdles which he must overcome if he is to get the declarations which he seeks.

and see the report of the

which proposed a legal framework for assisted dying  including strict criteria to deﬁne who might be eligible to receive assistance and robust safeguards to prevent abuse of any new law.  For a viewpoint on the Commission's report see

and for a view that the Commission's report is a terrible proposal which should be rejected see The Commentator.

In a different context - (Climate Change Protesters) - the defence of necessity in criminal law was touched upon in a post of 8th January 2011.

In 2005 there was an Assisted Dying for the Terminally Ill Bill in Parliament which did not progress into law and, in 2009, an amendment to the law put forward to the Coroners and Justice Bill was rejected in the House of Lords - (see BBC).   This Parliamentary Briefing Paper is also a valuable source of information.