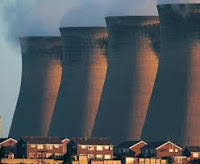 Climate Change protesters were sentenced in the Crown Court at Nottingham for conspiracy to commit aggravated trespass  - This is Nottingham 5th January 2011.   Aggravated trespass is defined in the Criminal Justice and Public Order Act 1994 s.68.   Conspiracy is an agreement between two or more persons to commit a criminal offence (Criminal Law Act 1977 s.1) and conspiracies are triable only in the Crown Court.   Sentencing for conspiracy is covered by the Criminal Law Act 1977 s.3.

The case is discussed on the UK Human Rights Blog -Climate Defence - a Wild Way Forward.   The case is interesting because the protesters argued in their defence that their action was aimed at prevention of the greater harm which will be caused by continuing operation of this form of power station.  In short, they claimed that their action was "necessary" to prevent such harm.


A defence of "necessity" is recognised by the law though there is considerable debate about its scope.  A "necessity" to break the criminal law may arise in a number of situations recognised by law - e.g. A resists an attack by B and injures B (self-defence); D commits a burglary because of threats of serious physical harm from E (duress); F drives his car into a shopping precinct in order to escape from people he believes are about to attack him (R v Willer 1986 - duress of circumstances); a surgeon operates to separate "conjoined twins" in the knowledge that one of them must die as a result but the other may well be saved - A (Children)(Conjoined Twins: Medical Treatment)(No.1) 2000.   The judges have always been anxious to keep such a defence within strict limits.  As Lord Denning put it in London Borough of Southwark v Williams 1971 - "Necessity would open a door which no man could shut ... The plea would be an excuse for all sorts of wrongdoing.  So the courts must, for the sake of law and order, take a firm stand."    Whatever the legal position in Lord Denning's time, the law has moved on and it seems that the genus of necessity is well established and some of the species seem to appear quite often in the courts though, for reasons given by Lord Denning, the various species remain in need of control lest they become unruly.

Note:  Some writers treat necessity as a distinct defence from other defences mentioned (e.g. duress).  Nevertheless, the term necessity appears to be a "genus" embracing the other defences ("species") since they are all situations in which, for a reason recognised as valid by the law, the defendant acted in a way which would involve what would normally be a breach of the law.

A trial of certain other persons in connection with the events at Ratcliffe-on-Soar power station is to commence on 10th January 2010.  See Ratcliffe on Trial blog.
Posted by ObiterJ at Saturday, January 08, 2011