Thousands of businesses enter into contracts on a daily basis. The complexity of such contracts varies enormously.

They can be straightforward deals for A to supply B with goods or a service for which B will pay the agreed price.  Such contracts may be no more than a verbal agreement that A will supply B and that B will pay. Other contracts may arise under a set of standard terms - often set out in a standard form.

Of course, many business contracts are complex and involve huge sums of money and the parties, often with the help of lawyers, will have a written contract attempting to address numerous possibilities including events beyond the control of the parties to the contract.

On Monday 16 March, the government
advised individuals to do, or not to do, certain things - Prime Minister's Statement 16 March - "We need people to start working from home where they possibly can. And you should avoid pubs, clubs, theatres and other such social venues."  Inevitably, that statement will lead to significant financial loss for such businesses and for their suppliers (e.g. food supply to pubs or restaurants).

At the time of writing, it has yet to be seen whether government will offer further support to businesses going beyond what was already done in the Budget of  11 March 2020. Support measures have been put in place in other European nations - e.g. in France, the government announced tax relief measures .

It is a basic principle of English contract law that a contract is not discharged simply because performing it has become more difficult for a party. Hence, if it became more difficult for A to obtain the goods he agreed to supply to B it remains the case that the A-B contract is still in place and A must, somehow, supply B even if, for example, this requires A paying more in order to meet his contractual obligations to B.  Of course, A and B might sensibly agree to bring their contract to an end but, again, such agreement may not prove possible.

In other instances it may be argued that the contract is "frustrated" in accordance with the English law of frustration of contract.  Essentially, to rely on frustration it is necessary for there to have been a supervening event which renders the performance of the seller's obligations impossible or fundamentally different in nature from that which was envisaged when the contract was made" - CTI Group v Transclear [2008] EWCA Civ 856 at para 14.

Recently, an interesting case arose in the High Court's Chancery Division concerning frustration of a lease - Canary Wharf Ltd v European Medicines Agency [2019] EWHC 335 (Ch) - Marcus Smith J. At para 21 the learned judge said - "The doctrine of frustration operates to bring a contract prospectively to an end because of the effect of a supervening event."  The judge then goes on to set out the principles of frustration of contracts - paras 21 to 46. It is a detailed exposition but well worth reading in full.  In the event it was held that EMA's lease at Canary Wharf was not frustrated by the withdrawal of the United Kingdom from the European Union. The judge said - "This is neither a case of frustration by supervening illegality nor one of frustration of common purpose. The Lease will not be discharged by frustration on the United Kingdom's transition from Member State of the European Union to third country nor does the EMA's shift of headquarters from London to Amsterdam constitute a frustrating event. The EMA remains obliged to perform its obligations under the Lease."  This case is considered further at Osborne Clarke - 21 February 2019 and by Victoria Hobbs at Two Birds - May 2019.

One way in which a contract might be frustrated is if its performance become illegal - "supervening illegality" as the cases put it.  This is discussed in the Canary Wharf case at para 41.

Millions of items are bought on a daily basis from supermarkets and other shops. Shppers have been  "stockpiling" particular products such as toilet rolls and hand sanitisers - BBC News 15 March. Some shops have started to limit the amounts that each customer may buy.


The contract to purchase is actually made at the checkout points where the customer makes an offer to buy and the shop (usually) accepts that offer. The shop is therefore fully entitled to refuse a purchase. This was established long ago in cases such as Pharmaceutical Society of Great Britain v Boots Cash Chemists (Southern) Ltd [1953] 1 QB 401, [1953] EWCA Civ 6 - Somervell, Birkett and Romer LJJ.

A prudent business will have insured against some business risks - e.g. loss of trade due to fire at business premises etc.  It seems unlilkely that many businesses will have cover for losses arising due to the coronavirus pandemic. Please see the Statement by the Association of British Insurers

On 17 March, the Chancellor of the Exchequer, in a statement to the House of Commons, said: - "Let me confirm today that for those businesses that do have a policy that covers pandemics, the Government’s action is sufficient and will allow them to make an insurance claim against their policy ....." 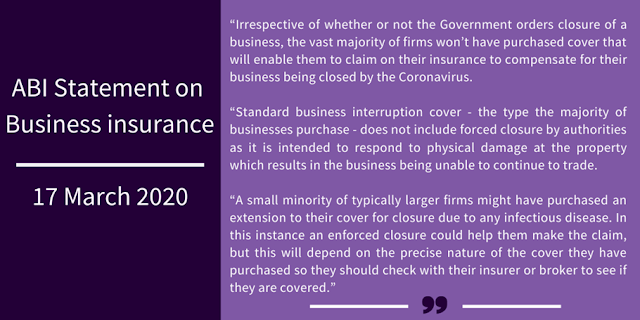