Coronavirus and the value of human rights


The talk is of greater Emergency Powers being granted to government to enable it to cope with the Coronavirus pandemic.

Let's make no mistake about the dangers of this virus. It is extremely serious and many deaths have already resulted from infection. There are no easy answers.

The instinct is therefore to say - Let the government have all the powers it says that it requires.

There may also be the idea
that "inconvenient" human rights laws should be swept aside so that they don't inhibit in any way the authorities.  This thinking could be attractive to the present government which plainly is not an admirer of either the European Convention on Human Rights or the Human Rights Act 1998. Such thinking would be a serious error and we should not be too ready to take such a road.


Barrister Adam Wagner has noted on Twitter that the present crisis is "exactly the kind of crisis which the modern human rights system was designed for."  He continues -

"The human rights framework emerged from a simple truth which had been amply evidenced - and this is it: Societies under pressure tend [to] close in on themselves, people turn to strong men, people turn on each other.

The idea of human rights was to build into societies a set of checks and balances which would, in principle, insure us against our worst natures - accepting (this is important) the simple truth that when crisis hits the *natural* instinct is to turn to illiberal measures.

Why are illiberal measures so damaging? Because they tend to trigger fear, panic and in history that has generally meant bad things for whatever group/s happen to be the scapegoat.

So the human rights idea is to build our institutions - government, courts, national culture - in a way which can respond to crises in a way which takes into account the basic rights of individuals - to life, liberty, free speech and so on."

When we actually look at the European Convention on Human Rights, we see that the most fundamental right is the right to life (Article 2). Without that right, there are no other effective rights!

Several of the other rights in the Convention permit a degree of leeway.

For example, Article 8  (Right to respect for private and family life) permits interference with the right "in accordance with the law" and the interference must be "necessary in a democratic society in the interests of national security, public safety or the economic well-being of the country, for the prevention of disorder or crime, for the protection of health or morals, or for the protection of the rights and freedoms of others."  Other articles have similar wording.

I have highlighted the exceptions for public safety and protection of health since both are plainly relevant to the coronavirus situation.

It is therefore crystal clear that legislation may be enacted which interferes with rights such as Article 8 provided that the interference in the legislation is necessary in a democratic society such as the UK.  It is incumbent on legislators in Parliament to scrutinise the powers sought by the government and to ensure that they meet the standards of the convention. The leeway permitted is not unlimited but, in response to a situation such as coronavirus, it is likely to be wide.


There is a further temptation and that is to simply copy measures adopted by States such as China. As Adam Wagner notes - "China already has a hugely effective system of state surveillance. In Wuhan they were apparently using facial recognition to stop people leaving their blocks. They have the ability to control the spread of information through social media.  I have heard many people, here and in private, saying "well, at least China has 'got a grip' on the situation". This is a classic case of 'we need a strong man to help us through this'. A Jack Bauer character to dispense with the niceties. But, thankfully, we don't live in a society which has built up an infrastructure of control such that the quarantining of an entire population is possible. We live [in] a quite different society. And our approach will have to be different as a result. On balance, this is good."

The response to coronavirus will expose the value placed by the UK government on human rights. Legislators must ensure that any powers granted are:
Regarding on-going scrutiny of powers there could be a need to consider the possibility that Parliament is unable to meet because of the risk from coronavirus. This possibility ought not to be used simply as a way to bring in powers of indefinite duration. The governmental system of the UK is capable of devising a mechanism for scrutiny and renewal of the powers even if parliament itself cannot sit. For example, the emergency legislation could provide for a committee of Privy Counsellors to be set up if Parliament is unable to meet.  Its membership could be formed on an all party basis and all four nations basis and could meet, if necessary, by video link.

Having pointed out that most convention rights have leeway, we should also consider Article 15 (Derogation).

Article 15 permits derogation from State obligations under the convention. There has to be a "public emergency" and coronavirus probably meets that requirement. The public emergency must also "threaten the life of the nation" and this point is much more debatable and, at the present time, it is not entirely clear whether this test is met (pdf) though the situation could alter.  Even if the public emergency and life of the nation tests are met, the measures adopted must still be those "strictly required by the exigencies of the situation" and must be consistent with the UK's obligations under international law. Hence, even in that situation, there is no carte blanche to do whatever the government wishes.

Italy has taken draconian steps to deal with the virus and the measures adopted are considered in an article by Alessandra Spadaro on EJIL:Talk! - "Do the containment measures taken by Italy in relation to COVID 19 comply with human rights law?"

A further discussion about derogation is at Opinion Juris 6 April 2020.


Finally, let's behave responsibly. All humans have fears and flaws and we need to look after each other. Shop for quarantined people. Don’t panic buy. Small acts of kindness. As Eleanor Roosevelt said- "


“Where, after all, do universal human rights begin? In small places, close to home - so close and so small that they cannot be seen on any maps of the world. Yet they are the world of the individual person; the neighborhood he lives in; the school or college he attends; the factory, farm, or office where he works. Such are the places where every man, woman, and child seeks equal justice, equal opportunity, equal dignity without discrimination. Unless these rights have meaning there, they have little meaning anywhere. Without concerted citizen action to uphold them close to home, we shall look in vain for progress in the larger world.” 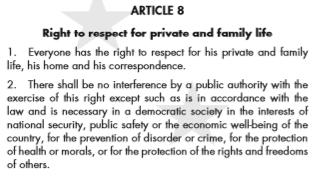 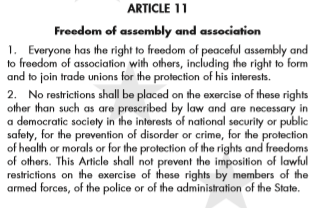 With thanks to Adam Wagner for his kind permission to utilise his comments on Twitter.

BBC News 17 March 2020 - Legislation to pass without vote amid coronavirus crisis - "Emergency legislation on the outbreak and the government's Budget will get "nodded through", rather than opposition MPs calling for a vote. Sources said Labour was attempting to strike a balance between scrutinising government and facing up to the virus.  Jeremy Corbyn has written to the PM, saying both parties should work together on coronavirus legislation. The outgoing Labour leader said it would ensure the opposition's concerns were taken on board as part of its drafting, rather than the party having to push for changes on the floor of the Commons."

A further discussion about derogation is at Opinion Juris 6 April 2020. This article also considers the views of Dr Alan Greene.
Posted by ObiterJ at Monday, March 16, 2020