The judgment of the majority in Miller v Secretary of State for Exiting the EU [2017] UKSC 5 noted at para 40 that - "Unlike most countries, the United Kingdom
does not have a constitution in the sense of a single coherent code of fundamental law which prevails over all other sources of law. Our constitutional arrangements have developed over time in a pragmatic as much as in a principled way, through a combination of statutes, events, conventions, academic writings and judicial decisions."

It is therefore necessary to look at such sources in order to discover the meaning of concepts such as parliamentary sovereignty and parliamentary accountability.

In Miller 2017, the Supreme Court referred several times to the Rule of Recognition. A useful Constitutional Law blog article by Mikolaj Barczentewicz explains the term - "... As described by HLA Hart, the rule of recognition is the ultimate rule of any sophisticated municipal legal system. It confers on legal officials a duty to recognize certain things as valid law of their legal system. It may do so by pointing to sources of law (‘whatever the Queen in Parliament enacts is law’) ....."

Within the UK, the rule of recognition is that Acts of the Queen in Parliament - (enacted by the House of Commons, House of Lords, and Royal Assent) - are the ultimate source of domestic law.

Albert Venn Dicey (1835 - 1922) was Vinerian Professor of English Law at Oxford and he was author of Introduction to the Study of the Law of the Constitution (1885) in which he wrote:

"The principle of Parliamentary Sovereignty means neither more nor less than this, namely, that Parliament … has, under the English constitution, the right to make any law whatever; and, further, that no person or body is recognised by the law of England as having a right to override or set aside the legislation of Parliament."

In Bobb v Manning [2006] UKPC 22, Lord Bingham said at para 13, “the conduct of government by a Prime Minister and Cabinet collectively responsible and accountable to Parliament lies at the heart of Westminster democracy."

In Miller 2017, Lord Carnwath described Parliamentary accountability as "fundamental to our constitution" and said (at para 249) -  "The Executive is accountable to Parliament for its exercise of the prerogative, including its actions in international law. That account is made through ordinary Parliamentary procedures. Subject to any specific statutory restrictions (such as under the Constitutional Reform and Governance Act 2010), they are a matter for Parliament alone. The courts may not inquire into the methods by which Parliament exercises control over the Executive, nor their adequacy."

The idea that the executive is accountable to Parliament has a lengthy history.  The rationale for such accountability was described by John Stuart Mill (1807-73) in his Considerations on Representative Government -

"Instead of the function of governing, for which it is radically unfit, the proper office of a representative assembly is to watch and control the government; to throw the light of publicity on its acts; to compel a full exposition and justification of all of them which any one considers questionable; to cinsure them if found condemnable, and, if the men who compose the government abuse their trust, or fulfill it in a manner which conflicts with the deliberate sense of the nation, to expel them from office, and either expressly or virtually appoint their successors."

In that passage, Mill highlights that it is not for the legislature to conduct the actual government and it is indeed unsuited to that task. Government is the business of the executive. hence, negotiations with the EU have been conducted by (or on behalf of) Ministers and not by Parliament. Mill also highlights that a feature of Parliament's role is to watch and control, to require justification, to require Ministers to explain their actions, and if the need arises to expel the government from office.

In February 1997, a resolution of the House of Commons stated: 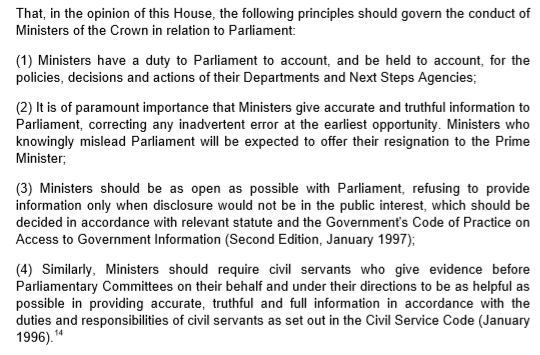 The terms of that resolution now appear in the Ministerial Code at para 1.3.

It is relatively easy to assert the existence of a principle of Parliamentary accountability but concerns exist as to how effective Parliament is in this role. In April 2018, The Institute for Government published Accountability in modern government: What are the issues?  where the topic is examined at some length.  The paper explores the main issues affecting accountability, the failures that flow from those issues and how they can be addressed.  According to the paper, accountability is governed by FOUR MAIN CONVENTIONS which have evolved over time to leave glaring gaps and a lack of transparency:
The April 2018 Institute for Government paper was followed up in October 2018 with Accountability in modern government - Recommendations for change.

The Supreme Court has now unequivocally placed accountability of Ministers to Parliament as a fundamental constitutional requirement. This appears to make accountability to parliament a matter of law as opposed to just convention.  However that may be, there is a clear need to strengthen the processes involved in holding Ministers to account including after they are no longer in post.

The Institute for Government recommendations ought to be followed up. They would clarify the relationship between Ministers and civil servants, better meet the challenges of complex modern government, and shift the culture of accountability from blame to learning and improvement.