On Monday 28 October, following discussions among the EU27, a "flextension" was granted to the UK's EU membership.  The EU Council decision is shown below - see Updates.  The Prime Minister sent a letter accepting the extension as he was required to do by the European Union (Withdrawal) (No 2) Act 2019 s.3.

It is reported - e.g. at Politico.eu - EU agrees to January 31 Brexit extension - that the extension will last until 31 January 2020 but membership could end 1 December 2019 or 1 January 2020 if the UK comes to be in a position to ratify the withdrawal agreement - (previous post).  Also, the extension is conditional
on the U.K. not acting to “jeopardize” the EU’s objectives and decision-making process. It further states that the extension cannot be used for further negotiations on the Brexit deal. (The terms of a previous extension contained an identical "no renegotiation" clause but the EU allowed the Withdrawal Agreement to be reopened and substantial changes were made).  During the extension period, the U.K. will have to appoint a European commissioner as it will remain a member state until the new withdrawal date, with full rights and obligations.

In the House of Commons, the Prime Minister tabled a motion under the Fixed-term Parliaments Act 2011 (FTPA) for an early general election - Hansard 28 October 2019.  The motion secured 299 votes in favour and 70 against but was not carried because the FTPA requires a two-thirds majority of MPs.

Later, the Leader of the House of Commons informed the House that, on Tuesday 29 October, the government would seek to legislate for an early parliamentary election - Hansard 28 October 2019. The Leader also stated that the European Union (Withdrawal) Bill would not be brought back to the House.

MPs will therefore vote on a Business of the House Motion which, if successful, will enable a Bill to be rapidly pushed through so that a General Election will be held on 12 December 2019.

There are serious and well-founded concerns about the Withdrawal Agreement particularly with regard to the position of Northern Ireland.  It certainly appears unlikely that the present House of Commons will resolve the Brexit paralysis.  Whether a new Parliament will be able to do so is for the future.

As things stand the UK will remain in the EU until 31 January 2020 (with the possibility of earlier exit). It appears that the EU is not minded to hold further negotiations about the agreement.

The Withdrawal Agreement Bill - currently in limbo - will lapse in the event that Parliament is dissolved in order to hold a general election. The Bill could be reintroduced in the new Parliament. The possibility of a no-deal exit from the EU therefore continues to exist.

A)  On 29 October, the European Council published its Decision regarding the extension to UK membership. 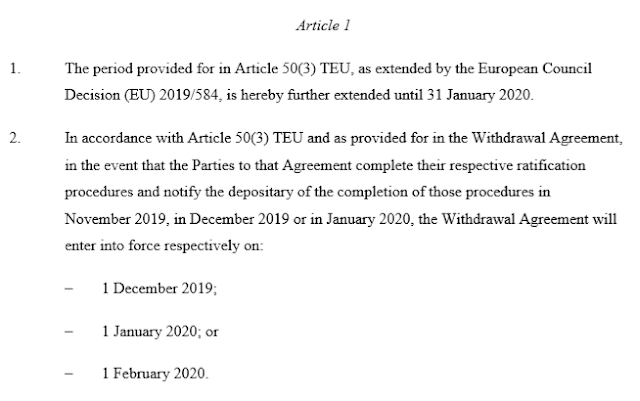 On 29 October, the Bill to enable a 12 December election passed its stages in the House of Commons and moves to the House of Lords.  The Third reading voting in the Commons was Ayes 438 to Noes 20 - a considerable number of MPs did not vote.  Proceedings in the Commons may be read in Hansard 29 October.  The Legal Background to the Bill is set out in Explanatory Notes.

D)  On Wednesday 30 October the Early Parliamentary General Election Bill passed through its stages in the House of Lords.

Hansard - Second Reading Debate - this stage lasted just over 2 hours after which the Bill was read a second time and committed to a Committee of the Whole House.


Hansard - Committee Stage, Report Stage and Third Reading - no amendments were set down to the Bill and no manuscript amendments were moved.  Nobody wished to speak in Committee. The Bill was reported without amendment and third reading agreed without further debate.

E)  Update 2 November - House of Commons Library What does the latest Brexit delay mean for the UK and EU?