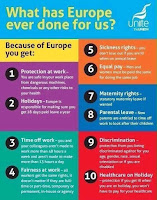 With just over 100 days left to Brexit on 29 March 2019, there seems to be no prospect of the Withdrawal Agreement being acceptable to a majority in the House of Commons.  The "meaningful vote" scheduled for Tuesday 11 December was deferred to a date yet to be fixed.  The government has indicated that it will bring the debate and vote back to the House by 21 January at the latest.

The Prime Minister faced a leadership challenge mounted by the Conservative Party.  Mrs May won the ballot by 200 votes to 117 or 63% to 37%.  This prompted Mr Jacob Rees-Mogg, MP for North-East Somerset and a leading light in organising the ballot, to argue that Mrs May ought to have then gone to see HM The Queen to resign as Prime Minister!  It hardly escaped the notice of commentators that Rees-Mogg is totally insistent that come hell or high water the 2016 referendum result (51.89% to 48.11%) must be honoured.


None of that is to say that the outcome of the leadership ballot came without a political price.  It revealed that, even within her own Party, Mrs May is far from being in the strongest of positions. This came at a time when the Prime Minister had announced that she was to seek "reassurances" regarding the Ireland / Northern Ireland Protocol ("the backstop") which had been criticised by many MPs during debate.  The principal criticism was that there is no time limit to the backstop once it is in place.

A European Council meeting was convened for 13 and 14 December.  On 13 December the Prime Minister attended and addressed the Council.  The Council Conclusions offer little more than minimal comfort to Mrs May's position.

1. Council stated that it reconfirmed its conclusions of 25 November 2018 and intended to proceed with ratification of the agreement.  The Agreement was not open for renegotiation.

2. Council wished to establish as close as possible a partnership with the United Kingdom in the future. It stands ready to embark on preparations immediately and was ready, after signature, to ensure that negotiations can start as soon as possible after the UK’s withdrawal.  (Note: The Agreement text already indicates that).

3.  The backstop is intended as an insurance policy to prevent a hard border on the island of Ireland and ensure the integrity of the Single Market.  The EU is determined to work speedily on a subsequent agreement that establishes by 31 December 2020 alternative arrangements, so that the backstop will not need to be triggered.

4.  If the backstop were to be triggered then it would apply temporarily, unless and until it is superseded by a subsequent agreement that ensures that a hard border is avoided. In such a case, the Union would use its best endeavours to negotiate and conclude expeditiously a subsequent agreement that would replace the backstop, and would expect the same of the United Kingdom, so that the backstop would only be in place for as long as strictly necessary.

5.  Finally, Council called for work on preparedness at all levels for the consequences of the United Kingdom’s withdrawal to be intensified, taking into account all possible outcomes.

Point 4 may be helpful to Mrs May since it is a statement that, if the backstop eventually kicks in, there could be further negotiations to bring the backstop to an end as soon as possible.  It need not become a permanent feature.

Nonetheless, the Prime Minister has returned with only some reassuring words but without changes to the Agreement itself.  Nothing less appears likely to satisfy her critics.

In a statement of 14 December, the Prime Minister indicated that further clarification and discussion following the Council’s conclusions is in fact possible and that "we will be holding talks in coming days about how to obtain the further assurances that the UK Parliament needs in order to be able to approve the deal" - Statement following EU Council

There is a serious political impasse and this must be addressed with urgency.

The Prime Minister is to make a statement in the House of Commons on Monday 17 December.  Whether she continues to plough the same furrow remains to be seen.  Time is certainly very short if there is to be a change of strategy.  If any such change requires an extension of the Article 50 period it is worth remembering that unanimous EU Council agreement is required.

There is a possibility that the Opposition in the House of Commons will raise a Vote of No Confidence in the government.  The arithmetic of that is difficult to predict and, despite their self-indulgent vote on Theresa May, Conservative MPs will naturally wish to remain in power and not run the risk of a general election being triggered.  A Vote of No Confidence, if it happens, will be a close run thing.

A dissolution of Parliament and therefore a general election will only come about under the Fixed-term Parliaments Act 2011.  A general election would take valuable time and it would be necessary to extend Article 50 given that Parliament has yet to enact legislation to implement any Withdrawal Agreement.

A further possibility is that the Withdrawal Agreement could be referred back to the people by holding a referendum.  Legislation is required to do this and enacting the legislation may not necessarily prove to be straightforward given that MPs will undoubtedly argue about details such as who is to be entitled to vote - e.g. 16 and 17 year olds, EU citizens resident in the UK etc.  The government has, up to now, set its face against holding such a referendum and has insisted that the 2016 referendum result must be honoured despite campaign irregularities which have now been proved and regardless of mounting evidence that a no deal departure from the EU will have serious economic consequences - (see links in this previous post).  Naturally, Remain supporters tend to want such a referendum but there is no guarantee that the actual result would be in their favour.  It might not be and then what?

Yet another possibility, albeit one that currently looks very remote, is that the UK takes advantage of the right to revoke the withdrawal notice and continue to be a member of the EU.  This right under EU law was established earlier this week by the Court of Justice of the EU in Wightman and others v Secretary of State for Exiting the EU.  This possibility could become reality if a referendum is held and the outcome of that was "Remain."

Those are some of the possibilities and there may be others such as the formation, somehow, of an emergency government to break the impasse.  That would require politicians on all sides to break away from party positions.  It would almost certainly require an Article 50 extension.  Such a government appears to be highly unlikely as things stand.

The Brexit clock is ticking down toward the one certainty in all of this.  The UK leaves the EU on 29 March 2019 unless that is somehow stopped.  Leaving will be either with a deal - and the present deal is the only one on the table -or without a deal and all the resulting economic uncertainty that will follow.

The 2016 referendum was a vote to Leave but HOW the UK leaves was not addressed in the referendum and the HOW has been determined by the government - principally by Mrs May and her close advisers - rather than by a process of trying to reach a consensus prior to triggering Article 50.  There continues to be no consensus on any alternative approach (e.g. Norway +).  This ought perhaps to focus minds on the merits of the present deal which delivers a form of Brexit and avoids the economic cliff-edge at the end of March 2019.  There is a "backstop" in the present deal and it has been made abundantly clear that ANY deal will involve a backstop.  However, there is the strong likelihood that the backstop will not be required if both sides negotiate assiduously to reach Agreement on the Future Relationship.  The present deal also offers a transition / implementation period until the end of 2020 during which the future relationship can be hammered out.  The present Political Declaration is but a starting blueprint to a future relationship agreement.

Meanwhile, as if to underline the point that Brexit is an act of national self-harm, the EU has announced a new Economic Partnership with Japan which, as a member, the UK would have been able to fully participate in.

Brexit has produced an enormous library of material.  The links below are informative and, in some cases, detailed but are nevertheless well-worth reading.

House of Commons Library - The meaningful vote deferred: What now?

The Guardian 14 December - Rafel Behr - Westminster has known the options since 2016.  Which Brexit does it want?


Politics.co.uk - A successor to Theresa May may not automatically become PM

Brexittime blog - Putting the bullet back in the chamber: Could Parliament exit from Brexit?

The Brexit blog - Prof. Steve Peers - The Brexit Ultras could have unwittingly gifted May, and the country, a slender lifeline - if she'll use it

UCL Constitution Unit - The mechanics of a further referendum on Brexit - a report by Jess Sargeant, Alan Renwick, and Meg Russell and funded by the JRSST Charitable Trust.

Sir Ivan Rogers - lecture at Liverpool University 13 December 2018- Sir Ivan Rogers on Brexit - Sir Ivan was the  Permanent Representative of the United Kingdom to the European Union from 4 November 2013 until his resignation on 3 January 2017.