CJEU judgment on revocability of notice under Article 50 TEU

In Wightman and others v Secretary of State for Exiting the EU, the Court of Justice of the EU (CJEU) has held that notification under Article 50 of the Treaty on European Union is unilaterally revocable.  Read the Court's Press release 10 December 2018 and the Court's Judgment.  See also House of Commons Library 10 December.

The UK government resisted this action at all stages.  The Prime Minister has also consistently maintained that the Article 50 notification will not be withdrawn.

The CJEU judgment answers a preliminary reference made by the Inner House of Scotland's Court of Session.  The matter now returns to the Scottish court which must give its judgment in the light of EU law as stated by the CJEU.

The decision of the Court of Session to make the reference is HERE.   Note para 3: 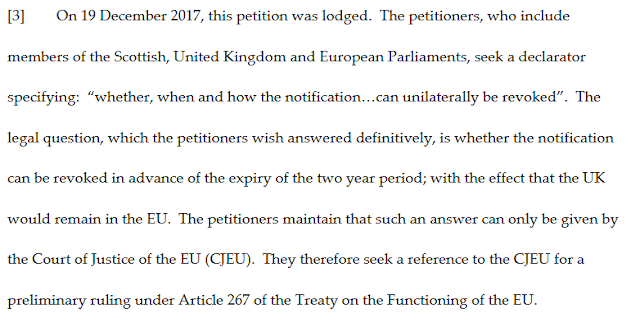 The CJEU's ruling is at para 76 of the court's judgment:

Article 50 TEU must be interpreted as meaning that, where a Member State has notified the European Council, in accordance with that article, of its intention to withdraw from the European Union, that article allows that Member State — for as long as a withdrawal agreement concluded between that Member State and the European Union has not entered into force or, if no such agreement has been concluded, for as long as the two-year period laid down in Article 50(3) TEU, possibly extended in accordance with that paragraph, has not expired — to revoke that notification unilaterally, in an unequivocal and unconditional manner, by a notice addressed to the European Council in writing, after the Member State concerned has taken the revocation decision in accordance with its constitutional requirements. The purpose of that revocation is to confirm the EU membership of the Member State concerned under terms that are unchanged as regards its status as a Member State, and that revocation brings the withdrawal procedure to an end.