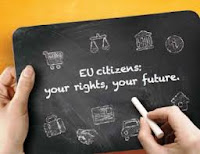 On Friday 8th December, after what had clearly been difficult negotiations, there was acceptance by the EU that "sufficient progress" had been made to allow talks to proceed further - Joint report from the negotiators of the EU and the UK government on progress during phase 1 of negotiations under Article 50 TEU on the UK's orderly withdrawal from the EU.

The EU Commission does not have the final say on whether negotiations can proceed further.  That decision will be taken at the European Council meeting on 14th/15th December though it is generally thought that the Council will endorse the Joint Report.

A REPORT and not a Withdrawal Agreement:


The Joint Report is NOT a Withdrawal Agreement as envisaged by Article 50 TEU but it is an important step along the way.  The Report records the progress made in the first phase of negotiations and "agreement in principle" was reached on (a) protecting the rights of Union citizens in the UK and UK citizens in the Union; (b) the framework for addressing the unique circumstances in Northern Ireland; and (c) the financial settlement.  The agreement in principle is on the package as a whole, as opposed to individual elements.  Under the caveat that nothing is agreed until everything is agreed, the joint commitments in the report shall be reflected in the Withdrawal Agreement in full detail.

Right at the end of the Joint Report is para. 96 which says that the UK agreed the report "on the condition of an overall agreement under Article 50 on the UK's withdrawal, taking into account the framework for the future relationship, including an agreement as early as possible in 2018 on transitional arrangements."  This appears to mean that failure to secure a Withdrawal Agreement would make the Joint Report merely part of the history.  What para 96 adds to the caveat "Nothing is agreed until everything is agreed" is not clear.  An abundance of caution is probably the reason for the paragraph.

In the event that "transitional arrangements" are agreed in the second phase of negotiations, some adaptations may be appropriate.  Transitional arrangements appear likely and, in her Florence Speech, the Prime Minister referred to a limited period of around 2 years and this was reflected in the Statement of Donald Tusk (EU Council President) on 8th December - ' ..... the UK has asked for a transition of about two years, while remaining part of the Single Market and Customs Union."

In reality, given the immense complexity of Brexit, a transition period is almost inevitable for the good of the economy generally.  It would be utterly irresponsible of government to end up with a "crash out" / "over the cliff edge" situation on 29th March 2019.

At least from the time of Theresa May's Lancaster House Speech (January 2017), it has been clear that the government wished to reach agreement on citizens' rights.  Mrs May referred to guaranteeing the "rights of EU citizens who are already living in Britain, and the rights of British nationals in other member states, as early as we can."  The Joint Letter goes a considerable distance in agreeing this crucial point.

"The overall objective of the Withdrawal Agreement with respect to citizens' rights is to provide reciprocal protection for Union and UK citizens, to enable the effective exercise of rights derived from Union law and based on past life choices, where those citizens have exercised free movement rights by the specified date" - (para. 6).

A common understanding has been reached and this is based on a more detailed consensus set out in the latest Joint Technical Note summarising the UK and EU positions.

Rights to remain in UK or EU27 State:

A clear consequence of Brexit has always been that EU rights could be lost including freedom of movement rights.  The Joint Letter provides that, following the specified date, a UK national legally residing in one of the EU27 States (e.g. France, Spain, Germany etc) will be able to remain there and can be joined by family members during that person's lifetime.

The UK and the EU27 will be able to require individuals to apply for a STATUS conferring the rights of residence provided for in the Withdrawal Agreement - (para 16).  Administrative procedures for applications for status will be transparent, smooth and streamlined and UK government work is proceeding with this.  Under para. 19, there will be safeguards in the Withdrawal Agreement for a fair procedure, and decisions on status will be subject to the redress mechanisms and judicial controls provided in Directive 2004/38/EC.

Paras. 20 to 32 of the Joint Report then set  out detailed points relating to matters such as Criminality and Security checks, social security, healthcare etc.  These are not considered further in this post.

The Withdrawal Agreement will provide for the legal effects of citizens' rights and national legislation will be required to address this - (paras 33 and 34).  The UK government will bring forward a Withdrawal Agreement and Implementation Bill to specifically implement the agreement - (para 36).

Para 36 states - "The UK Government will bring forward a Bill, the Withdrawal Agreement and Implementation Bill, specifically to implement the Agreement. This Bill will make express reference to the Agreement and will fully incorporate the citizens' rights Part into UK law. Once this Bill has been adopted, the provisions of the citizens' rights Part will have effect in primary legislation and will prevail over inconsistent or incompatible legislation, unless Parliament expressly repeals this Act in future. The Withdrawal Agreement will be binding upon the institutions of the Union and on its Member States from its entry into force pursuant to Article 216(2) TFEU."

This paragraph suggests that some "interesting" legal problems may lie ahead.  For example, it seems to be the case that, at least for citizens' rights, there will be a high degree of legal protection because of the words "will prevail over inconsistent or incompatible legislation, unless Parliament expressly repeals this Act in future."  In an interesting post, Professor Mark Elliott looks at some of the possible ramifications of this - Public Law for Everyone - The Brexit agreement and Citizens' rights: can Parliament deliver what the government has promised?   Professor Elliott's post "asks whether domestic constitutional law enables citizens’ rights to be given the degree of domestic legal protection that has been promised, and argues that it is not clear that it does."

Consistent legal interpretation of citizens' rights is an obvious necessity and is recognised by para. 37 and amplified in paras. 38 to 41.  Whatever those advocating the hardest of Brexits may have wished for, this section of the Joint Report envisages:

Status of EU citizens in the UK: what you need to know

Public Law for Everyone - The Brexit agreement and Citizens' rights: can Parliament deliver what the government has promised?

EU Law Analysis - The beginning of the end: Citizens' Rights