Brexit ~ David Davis at Exiting EU Committee // Lords report on what if no deal. 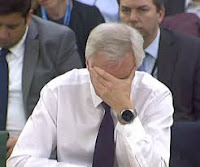 Resolutions of House of Commons:

"That this House recognises that leaving the EU is the defining issue facing the UK; notes the resolution on parliamentary scrutiny of the UK leaving the EU agreed by the House on 12 October 2016; recognises that it is Parliament’s responsibility to properly scrutinise the Government while respecting the decision of the British people to leave the European Union; confirms that there should be no disclosure of material that could be reasonably judged to damage the UK in any negotiations to depart from the European Union after Article 50 has been triggered; and calls on the Prime Minister to commit to publishing the Government’s plan for leaving the EU before Article 50 is invoked, consistently with the principles agreed without division by this House on 12 October; recognises that this House should respect the wishes of the United Kingdom as expressed in the referendum on 23 June; and further calls on the Government to invoke Article 50 by 31 March 2017."

"That this House recognises that leaving the EU is the defining issue facing the UK; believes that there should be a full and transparent debate on the Government’s plan for leaving the EU; and calls on the Prime Minister to ensure that this House is able properly to scrutinise that plan for leaving the EU before Article 50 is invoked; and believes that the process should be undertaken in such a way that respects the decision of the people of the UK when they voted to leave the EU on 23 June and does not undermine the negotiating position of the Government as negotiations are entered into which will take place after Article 50 has been triggered."

The Resolution of 7th December required the government to trigger Article 50 TEU by the end of March 2017.  A the time, the "Brexit litigation" was before the Supreme Court of the UK.  The court heard final submissions on 8th December 2016 and gave its judgment on 27th January 2017.  In essence, legislation was required to authorise the triggering of Article 50.  The government could not, as many thought possible at the time, use prerogative powers to give the notice.  A Bill was drafted and, without amendment, it became law as the European Union (Notification of Withdrawal) Act 2017.

The two resolutions (October / December 2016) contain acceptance that the "negotiating position of the government" was not to be undermined and that there would be "no disclosure of material that could be reasonably judged to damage the UK in any negotiations."   However understandable, this stance was bound to make it harder for members of Parliament to obtain information from the government.

The December Resolution also required publication of the government's plan for leaving the EU.  In February 2017 this was published - The UK's exit from and new partnership with the EU

On a considerable number of occasions Ministers referred to analytical work being undertaken by the government.  For example, on 20th October 2016  Mr Davis informed Parliament - "The Government continue to undertake a wide range of analysis covering all parts of the UK to inform the UK’s position for the upcoming negotiation with the European partners" - HERE

The Department has carried out an in-depth assessment right across 50 sectors of the economy. We have made it clear, however, that it is not in the national interest for us to produce a running commentary on the way in which we are developing our negotiating position, and that will remain the case."

Further examples could be given of occasions when the government has referred to the work being undertaken on  Brexit.  The Jack of Kent blog has helpfully produced a summary of the Early History of the 58 Brexit sector analyses

"The Department for Exiting the European Union, working with officials across Government, continues to undertake a wide range of analysis to support our negotiations. Our work covers the breadth of the UK economy, and we are looking in detail at more than 50 sectors as well as areas of cross-cutting regulation. Parliament has agreed that we will not publish anything that would undermine the Government’s ability to negotiate the best deal for Britain. Now, that the Prime Minister has initiated the Article 50 process and negotiations have begun in earnest, I can confirm that we will shortly be publishing the list of sectors we have been examining - though this of course does not mean that we have changed our position on revealing information which may harm our negotiating position."

On 30th August, Seema Malohtra MP sent a Freedom of Information Request to the Department for Exiting the EU - the request may be read HERE.  Notably, the request used the term "sectoral analyses."   This request was rejected - The Guardian 30th October - with the government claiming the need for a "safe space to allow for design and deliberation to be done in private.”   “In this case, releasing the commissioning document for this exercise, which is still a live policy issue, may undermine the effective formulation or development of policies which are key to our negotiating strategy. Disclosure would similarly set a precedent that would inhibit free and frank discussion in the future. Without the necessary safe space for unreserved instruction in commissioning briefs, the quality of the eventual advice from the respective exercise would be diminished and would in turn lead to poorer decision making.”

So, whatever the "in-depth assessment right across 50 sectors of the economy" amounted to was not to be shared with MPs let alone business and the public generally.  Nevertheless, the government published a list of 58 sectors which it said it had studied - see City A.M.  October 2017.

On 1st November there was the debate on a Humble Address seeking the material - previous post 1st November.

"That an humble Address be presented to Her Majesty, That she will be graciously pleased to give directions that the list of sectors analysed under the instruction of Her Majesty's Ministers, and referred to in the Answer of 26 June 2017 to Question 239, be laid before this House and that the impact assessments arising from those analyses be provided to the Committee on Exiting the European Union."

The Opposition motion was moved by Sir Keir Starmer QC MP (Labour) and the government side of the debate was led by Mr Robin Walker MP (Parliamentary Under-Secretary at the Department for Exiting the EU).

The Humble Address contained a quite obvious problem because it used the term "Impact Assessments" even though the Minister (Mr Robin Walker) went to some length during the debate to say that there were "sectoral analyses" but not "impact assessments."   For example, he said:

"The House was quite keen to hear out some of this analysis, so I thought it would be helpful if I set out some of the details of what it is and what it is not. I have explained that the analysis is not a series of 58 economic impact assessments. It is a cross-sectoral analysis. It is not just work undertaken by our Department, as it draws on analysis and expertise across the whole of Government. But it is not the case—and I do not believe that this Department or any of its Ministers has ever said that it is—that there are 58 economic impact assessments that neatly summarise what all the eventualities could mean for each sector."

"As set out in the document we published, we estimate that the 58 sectors covered account for around 88% of the UK economy, so they provide a comprehensive framework from which to analyse the entire economy ...."

The matter again came before the Commons on 7th November - HERE.  An urgent question was asked by Matthew Pennycook MP - "To ask the Secretary of State for Exiting the European Union if he will make a statement on when the Government intend to provide the Select Committee on Exiting the European Union with impact assessments arising from sectoral analyses carried out by Her Majesty’s Ministers."

This time the government side was represented by Mr Baker MP (Parliamentary Under-Secretary of State) who was again at pains to describe what the material was:


"As the Government have made clear, it is not the case that there are 58 sectoral impact assessments ...."

Subsequently, as a response to the Humble Address, the government handed over what amounted to two lever arch files containing 850 pages.  Little more than a dozen or so pages for each of 58 sectors many of which are vital to the nation such as aviation.


The letter of 27th November from David Davis to the Chair of the Exiting the EU Committee is worth noting.  In this Mr Davis says that "there are not, nor have there ever been, a series of discrete impact assessments arising out of our analysis of the 58 sectors."  The nature of the material disclosed to the committee was set out as:
The material was not exhaustive and was not the final say.

This brings us to Wednesday 6th December 2017 when Mr Davis appeared before the Exiting the EU Committee.  This meeting can be viewed here.

As reported by The Guardian 7th December,  Mr Davis was asked by the committee Chairman if the government had carried out any forecasts on the possible impact of Brexit on the automotive, aerospace or financial services sectors. “The answer’s going to be no to all of them,” Davis replied.

The committee also took evidence from Mr Philip Rycroft (Permanent Secretary DExEU) who indicated that the two lever arch files contain the bulk of the total material with some material removed if it was deemed to be commercially sensitive or negotiation sensitive.   Mr Rycroft also said that the material was not Impact Assessment as that term is understood within the civil service and as set out in Cabinet Office Guidance - Guide to Making Legislation - July 2017 - Chapter 14

The Exiting the EU Committee determined that Mr Davis was not in contempt.  Whether there is any further action within the House of Commons relating to contempt remains to be seen.  No doubt the committee decided the point along Party lines and the Conservatives have a majority on this (and other) committees.

Given what Ministers had said during the debate on the Humble Address it is a pity that the wording referred to impact assessments and there was no attempt to have the Address amended so as to reflect the exact nature of what was available.  The fact that Parliament had accepted the need not to harm negotiations by disclosure gave Ministers a lot of scope not to reveal material.  It would seem difficult to find Mr Davis in contempt of Parliament in such circumstances.

It will be for the Exiting the EU Committee to consider what to do with the material supplied. Individuals and business has to try to plan ahead.  If the material is published it would help with that process.

The absence of detailed quantitative assessment of the economic impact of Brexit on the various sectors is a regrettable feature of this entire affair though the difficulties should not be under-estimated of producing this against a background of on-going uncertainty about how the negotiations on the Withdrawal Agreement will conclude.


It is worth noting the extensive material published on behalf of the European Parliament - Brexit Impact Studies.

For a much more cutting view please see Politics.co.uk - Jonathan Lis - David Davis: Word Games, imaginary impact assessments and the truth everyone was too embarrassed to spell out.

It appears that on 7th December the Good Law Project has issued proceedings against HM Treasury and DExEU:


The @GoodLawProject and @MollyMEP have today issued proceedings against @hmtreasury and @DExEUgov to obtain the studies I continue to believe exist.
— Jo Maugham QC (@JolyonMaugham) December 7, 2017

A House of Lords report:

Brexit: deal or no deal

Most interesting that this report contains material such as: