Here in Manchester, it has been a week blessed with the finest of weather that only an English spring can produce.  It was also a desperately sad week in which we saw both the worst and the best of humanity played out in this great northern city.

The attacker was identified by police as Salman Ramadan Abedi – (see BBC 26th May) - a 22-year-old Briton of Libyan ancestry who detonated a shrapnel-laden improvised explosive device at one of the exits as concertgoers were leaving.  Abedi was born in Manchester in 1994, grew up in the Whalley Range area and lived in Fallowfield.  It appears that he was known to British Security Services but was not regarded as high risk – The Guardian 23rd May.

At the time of writing, the Police investigation is on-going and there have been 10 arrests over the period 23rd May to 26th May.  8 people remain in custody and 2 were released without charge – see Greater Manchester Police – Breakdown of arrests.  The arrests are said to be on suspicion of commission of offences under “the terrorism act.”

The response of Greater Manchester Police, Greater Manchester emergency services and the Hospitals has been magnificent.  The government instigated Operation Temperer and troops were deployed to Manchester and to some other locations - The Telegraph - 24th May 2017

The General Election campaign was briefly put on hold but had been largely resumed by Wednesday 24th May.  This blog is not the place to examine the many political controversies though it has been a concern for a considerable time that Police numbers have been significantly reduced.  For example, see the article by Professor Tim Newburn (London School of Economics) published by the BBC 24th November 2015.

The Chair of the Police Federation - Military Deployment is a step change in UK Policing - commented – “As always, the response of emergency workers in the face of adversity has been second to none.  The welcome support of the military to free up armed officers and offer public reassurance will no doubt be managed in the same professional, resolute way.  But, as welcome as this is, we cannot avoid the reasons it is needed at all. There is no ignoring the fact that we, the police, simply do not have the resources to manage an event like this on our own.”

The Police Federation are emphatic that “visible neighbourhood policing” is the basis for helping identify and tackle crime, including terrorism.  It is reasonable to think that if Police contact with the public reduces then a valuable source of information also reduces.

The former system of "Control Orders" was replaced by Terrorism Prevention and Investigation Measures (TPIM) by legislation enacted in 2011.

Code H - made under the Police and Criminal Evidence Act 1984 (PACE) - applies in connection with detention, treatment and questioning by police officers under the Terrorism Act 2000.

The government’s counter-terrorism strategy is known as CONTEST. The aim of CONTEST is to ‘reduce the risk from terrorism, so that people can go about their lives freely and with confidence’ (HM Government, 2011).

Prevent forms a vital part of CONTEST:
The Joint Committee on Human Rights reported on Counter-Extremism in July 2016.

A vigil held in Albert Square, Manchester on the evening of 23rd May. 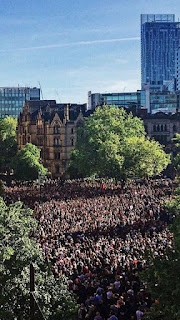 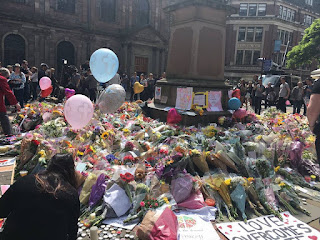