The session did not reveal much detail about the government's plans for human rights and, after this length of time, any plans ought to be quite advanced.

Mr Gove said
that the government is committed to convention rights though we can expect some changes concerning how particular rights are to be applied.  There was talk of placing a "gloss" on some rights but, again, little detail other than an example of more emphasis on freedom of speech.  "Glossing" rights might result in considerable litigation since any "British rights" could not detract from "Convention rights."

The extension of human rights law to British Armed Forces operating abroad will also be addressed and this may be done by some form of derogation.

The EU Charter of Fundamental Rights might also come within the proposals but it was not clear whether it would be included.  There will be consultation with the devolved governments in Edinburgh, Cardiff and Belfast and also a public consultation.

An observer of this session might form the view that changes will not be extensive though the Human Rights Act will be repealed and replaced.  This led to a comment that if the changes were minimal then why change things - Sit Down: You're rocking the boat.  (An amusing reference to Guys and Dolls)!  For my part, I admit to scepticism regarding the government's intentions and so we must await the consultation and examine the detail.

Two of the key issues for any proposals will be - (a) how rights will be enforceable, if at all, in courts within the UK and (b) how decisions of the European Court of Human Rights are to be viewed by UK courts - i.e. the Human Rights Act section 2 point (take into account) though it certainly cannot be said at the present time that UK senior courts will slavishly obey Strasbourg decisions even if they may do so normally.   Other issues will doubtless arise once the proposals see light of day.

EU and the referendum:

In November 2015, the Prime Minister wrote this letter to Mr Donald Tusk (President of the EU Council) setting out his "demands" for a new settlement for the UK within the EU.  Since then, the Prime Minister has devoted much time to this matter.  The outcome is a proposal from Donald Tusk and this will be discussed further during February with a view to a final position by the end of the month.  Mr Tusk's proposal contains links to considerable further detail.  The proposal seems to have met with a mixed reception (Reuters 2nd February) and see also BBC News 2nd February.   The Act of Parliament for the holding of a referendum came fully into force on 1st February.

BBC - What Cameron wanted and what he got.  An early comparison of the demands against the proposal.

Headlines - the morning after: 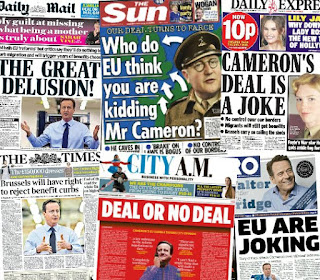