23rd June 2016 has been announced by the Prime Minister as the date when the British people will answer this question which will appear in the ballot papers:-

This question, which is set out in section 1 of the European Union Referendum Act 2015, is possibly the biggest question ever put to the whole of the United Kingdom population in a referendum.  (The Scotland independence referendum in 2014 was of massive importance.  Voting was confined to the electorate in Scotland).  The Prime Minister has said that - " ... whatever your decision, I will do my best to deliver it."  In this post, I seek (briefly) to highlight just a few points.

Does the referendum result bind the government in law?

NO since there is nothing in the 2015 Referendum act to try to do this.  Politically, it would be very difficult for the present government to ignore a referendum result in favour of leaving the EU.


Information to be produced:

The 2015 Act also requires the government to publish information about the outcome of negotiations and about EU membership:

The Statement required by section 6 was announced by the Prime Minister on 22nd February - "The best of both worlds: the UK's special status in a reformed EU"

Section 7 requires:
The information published under section 7 of the Referendum Act - Possible models for the UK outside the EU and Rights and Obligations of EU Membership

The European Council's conclusions of 19th February are available at European Council.  There are four sections in Annex I of this document:  A - Economic Governance; B - Competitiveness; C - Sovereignty and D - Social Benefits and Free Movement.  The decision results from the renegotiation process spearheaded principally by the Prime Minister and the European Council President Mr Donald Tusk.  The document notes that the decision is actually that of the Heads of State or Government meeting within the European Council and THEY have declared it to be legally binding.

In November 2015, the Prime Minister wrote this letter to Mr Tusk setting out his "demands" for a new settlement for the UK within the EU.  A proposal from Donald Tusk followed and this was discussed further during February with a view to reaching a final position which is that set out in the Deal of 19th February.

The European Council is made up of  Heads of State or Heads of Government together with its President and the President of the Commission.  It gives the EU political direction but does NOT exercise legislative functions (Treaty on European Union Art. 15) (TEU).

The decision contains political commitments to try to achieve certain matters.  For example, the TEU Article 1 refers to a process of creating an ever closer union among the peoples of Europe.  The aim is to amend the TEU (at some time) to clarify that references to ever closer union do not apply to the United Kingdom.

The far from simple question of what may be legally binding is discussed in some detail at EU Law Analysis - The final UK EU renegotiation deal.  It seems that the Decision, whilst not described as a Treaty, could be regarded as a ‘treaty in simplified form’ (see the broad definition of a treaty in Article 2(1)(a) of the Vienna Convention on the Law of Treaties).   The UK government clearly regards it as such a treaty and is going to register it with the United Nations - (see Articles 77-80 of that Convention).   Treaties are, of course, binding in international law.  Even if it is correct that the decision is such a treaty, there will be some way to go before several aspects of the decision become part of the law of the EU.  Several potential stumbling blocks lie ahead and so the outcome on some matters is uncertain at this stage.  The UK government will also table some domestic legislation linked to the renegotiation deal.

Here are two assessments of the settlement - Open Europe - What did the UK achieve it its EU renegotiation?   Chatham House - Cameron's incomplete negotiation complicates EU vote

Further material on this is at: Explaining the EU deal: Is it legally binding?

The information published under section 6 of the Referendum Act states clearly (page 33) that the decision is legally binding in INTERNATIONAL law.


At the time of writing, it is understood that some form of Parliamentary action is to be taken by the government to emphasize the sovereignty of the United Kingdom.  I will comment on that as and when it is published but there is no doubt legally-speaking that the United Kingdom remains a Sovereign Nation even if the government's freedom to act is restricted in numerous areas by EU activity.  Legally, in the UK, sovereignty rests with the Queen in Parliament.  The important notion of Parliamentary Sovereignty is discussed by the Head of Legal Blog.

See also the discussion by Rhodri Thompson QC at Eutopialaw

The European Convention on Human Rights (ECHR) is a creature of the COUNCIL of EUROPE and NOT the European Union.  There always seems to be endless confusion about this.  Leaving the EU (if that's what the people vote for) is NOT at all inconsistent with the United Kingdom's position as a signatory to the ECHR.   We know that the government is to announce its plans for British human rights in the near future BUT the UK will be remaining a signatory to the ECHR.

Leaving - what is the process?

This is set out in TEU Art 50 which I quote in full below.  In brief, a withdrawal agreement has to be drawn up and a timetable for leaving agreed. This is not likely to be either simple or an overnight event and, after the referendum, one wonders just how quickly the government might act to press ahead with starting the process required by Article 50.

Whenever it starts, there is a lack of clarity about what Article 50 actually requires.  It tells us that there is to be an agreement "setting out the arrangements for withdrawal" but the contents of such an agreement are not specified.  It may be that the Article 50 agreement does not need to cover all matters and there will be numerous areas to be addressed.  In particular, any UK-EU trading relationship may take many years to establish.  Then there are many other areas such as criminal justice - e.g. the European Arrest Warrant.  If not dealt with by the Article 50 agreement, such topics will have to be dealt with by separate UK-EU treaties.

Article 50 was added to the EU Treaties in 2009 and is discussed at EU Law Analysis.

1. Any Member State may decide to withdraw from the Union in accordance with its own
constitutional requirements.

2. A Member State which decides to withdraw shall notify the European Council of its intention. In the light of the guidelines provided by the European Council, the Union shall negotiate and conclude an agreement with that State, setting out the arrangements for its withdrawal, taking account of the framework for its future relationship with the Union. That agreement shall be negotiated in accordance with Article 218(3) of the Treaty on the Functioning of the European Union. It shall be concluded on behalf of the Union by the Council, acting by a qualified majority, after obtaining the consent of the European Parliament

3. The Treaties shall cease to apply to the State in question from the date of entry into force of the withdrawal agreement or, failing that, two years after the notification referred to in paragraph 2, unless the European Council, in agreement with the Member State concerned, unanimously decides to extend this period.

5. If a State which has withdrawn from the Union asks to rejoin, its request shall be subject to the procedure referred to in Article 49

There are some interesting points about Article 50 in the Court of Appeal's judgment in Shindler v Chancellor of the Duchy of Lancaster - a case concerned with voting rights in the EU referendum. 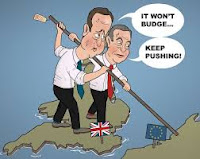