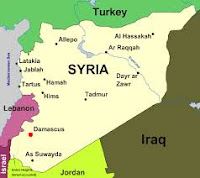 The government has presented its case for extending British military action to Syria in its effort, along with other nations, to deal with the threat to international security posed by Islamic State (ISIL).  Let's recall that the United Nations Security Council recently referred to this threat as a global and unprecedented threat to international peace and security.  The Security Council unanimously passed Resolution 2249 (2015) - previous post and Read the Resolution.

Foreign Affairs Committee Second Report of Session 2015-16 on the Extension of offensive British military operations to Syria published 29th October 2015.  The report contains discussion as to the legality of the proposed action (at page 11).  The evidence given to the committee by Professor Marc Weller and Mr Dominic Grieve QC MP are both referred to.  Their evidence was given in early October and early September respectively - a considerable time before the attacks in Paris (13th November).

The Prime Minister's statement of 26th November 2015 responding to the Foreign Affairs Committee Second Report of Session 2015-16. It is clear from the statement that the prime Minister does not regard military action as the whole answer.

The government is committed to asking the House of Commons to approve military action being extended to Syria.  In his statement, the Prime Minister said - "There will not be a vote in this House unless there is a clear majority for action……because we will not hand a publicity coup to ISIL.  Mr Speaker, I am also clear that any motion we bring before this House will explicitly recognise that military action is not the whole answer."  There is clear reference in the statement to the need for a new Syrian government to replace that of President Assad though it is said that this will be achieved by "political transition."

In large measure, the government bases the legality of its proposal on Article 51 of the United Nations Charter which was discussed back in September in this previous post relating to the killing by drone attack of Reyaad Khan and others.

"Nothing in the present Charter shall impair the inherent right of individual or collective self-defence if an armed attack occurs against a Member of the United Nations, until the Security Council has taken measures necessary to maintain international peace and security. Measures taken by Members in the exercise of this right of self-defence shall be immediately reported to the Security Council and shall not in any way affect the authority and responsibility of the Security Council under the present Charter to take at any time such action as it deems necessary in order to maintain or restore international peace and security."