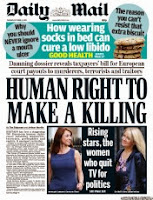 UPDATE 13th November - the Daily Mail published a 'correction' to its story.  Too little and too late as Adam Wagner points out in a post on UK Human Rights blog.

This is highly unusual but the Council of Europe has challenged media reports relating to payments to 'criminals.'  The Council claims that the media have mixed together costs and compensation payments.  Also, some of those paid compensation were not criminal at all but simply individuals whose human rights had been breached.  The Council also strongly refutes the statement that the judges are not legal experts.

The attack on human rights protection is relentless.  Here is the Daily Mail today.  The Telegraph has the same story.  The Mail article states that Judges in Strasbourg handed the criminals taxpayer-funded payouts of £4.4 million – an average of £22,000 a head.  Recipients since 1998 include the traitor George Blake, extremist cleric Abu Qatada and the IRA killer dubbed Mrs Doubtfire.

The figures have been produced by Philip Davies MP and will have fuelled fresh demands for Britain to pull out of the convention on which the European Court of Human Rights bases its rulings.

The Mail also states that - 'Because they are political appointees many of the court’s judges are not even legal experts.'

The European Convention has always contained provision for the court to award 'just satisfaction' and, as part of Bringing Rights Home, this was reflected in section 8 of the Human Rights Act 1998.  Here is some of the legal background.

The Judges are not legal experts?

That statement is plainly wrong.  Under Article 21 of the European Convention on Human Rights, Judges must be of high moral character and must either possess the qualifications required for appointment to high judicial office or be jurisconsults of recognised competence.  Judges are elected - (not directly by the people) - by the Parliamentary Assembly of the Council of Europe.  Selection is from 3 names put forward by the State in relation to which there is a vacancy.  They serve for 9 years and may not be re-elected (Article 22).  Details of the serving judges may be seen on the website of the European Court of Human Rights - here.  (Clicking on the + sign in the right hand column reveals the judge's CV).

It is true that the European Court of Human Rights awarded Abu Qatada 'just satisfaction' for unlawful detention - The Guardian 2009.  The amounts awarded were purposely kept as low as possible.  The unlawfulness of Abu Qatada's detention was decided by the House of Lords in 2004 in what has become known as 'The Belmarsh Case' or A and others v Secretary of State for the Home Department [2004] UKHL 56.  The House of Lords declared section 23 of the Anti-terrorism, Crime and Security Act 2001 to be incompatible with articles 5 and 14 of the European Convention on Human Rights in so far as it was disproportionate and permitted detention of suspected international terrorists in a way that discriminated on the ground of nationality of immigration status.

It was in the same case where Lord Hoffmann stated (para 97) - 'The real threat to the life of the nation, in the sense of a people living in accordance with its traditional laws and political values, comes not from terrorism but from laws such as these. That is the true measure of what terrorism may achieve. It is for Parliament to decide whether to give the terrorists such a victory.'

Thus, the essential point overlooked by the attack on the Convention is that it exists to protect legal rights of everyone including those 'hate figures' whom government and the media choose to detest.   This is a fundamental point about the rule of law.

The European Convention system permits the award of what is called 'just satisfaction' when States are found to have breached rights.  Article 41 states: 'If the Court finds that there has been a violation of the Convention or the Protocols thereto, and if the internal law of the High Contracting Party concerned allows only partial reparation to be made, the Court shall, if necessary, afford just satisfaction to the injured party.'

Hence, awards are made where national law permits only partial reparation AND where it is 'necessary' to make awards.

Traditionally, English common law did not offer a specific menu of rights guaranteed by the State.  Ultimately, everything was at the mercy of the legislative supremacy of Parliament.   However, various torts (civil wrongs) developed such as 'false imprisonment' and 'malicious prosecution' - (post of 16th July offers an example).  Where a claimant is able to establish the tort then damages will be payable.  Exceptionally, the common law also offered 'exemplary damages' - see Rookes v Barnard [1964] UKHL 1 - e.g. where the government or its servants have acted oppressively, arbitrarily or unconstitutionally.

One of the features of the Human Rights Act 1998 is that it provides for remedies for breach of convention rights and those remedies are available in the English courts.   Under section 8 an award of damages is possible but, by section 8(3), is limited to cases where the court is satisfied that an award of damages is necessary to afford just satisfaction to the individual.  Thus, as might be expected in this carefully drafted legislation, section 8(3) reflects Art. 41 of the Convention.  It is clearly not the intention of Parliament to enable awards of damages in situations going way beyond where just satisfaction would be awarded by Strasbourg.

The principal domestic case on awards under section 8 is R(Greenfield) v Secretary of State for the Home Department [2005] UKHL 14 where Lord Bingham gave the leading judgment.   See also the discussion in the cases of Faulkner and Sturnham decided by the UK Supreme Court - Press summary (PDF) and Judgments (PDF)

In Greenfield, Lord Bingham noted that the European Convention has always contained the just satisfaction provision.  The focus of the Convention is on securing observance by member states of minimum standards in the protection of the rights specified in the convention.  Members states are bound by decisions in cases to which they are a party and the expectation therefore is, and has always been, that a member state found to have violated the Convention will act promptly to prevent a repetition of the violation, and in this way the primary object of the Convention is served. The Convention has always, however, made provision for affording just satisfaction to the injured party.

Writing for the UK Human Rights blog, Rosalind English took a detailed look at the Supreme Court's judgments in Faulkner and Sturnham.   English points out:

'When deciding whether to award damages, and if so how much, the UK courts are not strictly bound by the principles applied by the Strasbourg court in awarding compensation under article 41 of the Convention (see Lord Bingham in R (Greenfield) v Secretary of State for the Home Department 2005] 1 WLR 673.   But Section 8(4) HRA enjoins them to take Strasbourg principles “into account”.  But where are these principles to be found?  The problem with relying on the Strasbourg approach to the assessment of damages (or anything else for that matter) is that there is little by way of consistent or clear guidance in the reports (see the Law Commission’s critique of this aspect of Strasbourg jurisprudence, and this refreshingly robust reflection by one commentator:

It is rare to find a reasoned decision articulating principles on which a remedy is afforded. One former judge of the European Court of Human Rights privately states: ‘We have no principles’. Another judge responds, ‘We have principles, we just do not apply them’.” (Dinah Shelton, Remedies in International Human Rights Law (1999) p 1)

Here then is the heart of the problem.  The European Court of Human Rights needs to adopt clearer principles in this area otherwise the door is wide open to criticism by those (including leading politicians) who seek to find fault with the convention system.  Meanwhile, where damages under HRA 1998 s8 are claimed in an English court, the guidance given in Greenfield and by the Supreme Court in Faulkner and Sturnham will apply.  In particular, Lord Reed helpfully summarised his conclusions in 15 points listed in paragraph 13 of  the court's judgment - see Judgments (PDF)

Lord Hoffmann speech in 2009 - The Universality of Human Rights

Richard A Edwards - The Supreme Court's curious constitutional U turn over prisoner rights
Posted by ObiterJ at Tuesday, October 08, 2013