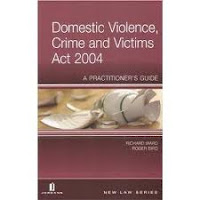 Section 5 of the 2004 Act created the offence of causing or allowing the death of a child or vulnerable adult.  The 2012 Amendment Act extends section 5 so as to cover causing or allowing "serious physical harm."   The amended section 5 will come into force on a date to announced by Statutory Instrument.  The amendments will not apply in relation to any harm resulting from an act that occurs, or so much of an act that occurs, before the commencement date.

A new section 6A (dealing with evidence and procedure) is inserted into the 2004 Act.  The Schedule to the 2012 Act sets out various consequential amendments to various other Acts.

(1) A person (“D”) is guilty of an offence if -
(a) a child or vulnerable adult (“V”) dies or suffers serious physical harm as a result of the unlawful act of a person who -
(i) was a member of the same household as V, and
(ii) had frequent contact with him,
(b) D was such a person at the time of that act,

(a) constitutes an offence, or
(b) would constitute an offence but for being the act of -
(i) a person under the age of ten, or
(ii)a person entitled to rely on a defence of insanity.
Paragraph (b) does not apply to an act of D.

(6) In this section -
“serious” harm means harm that amounts to grievous bodily harm for the purposes of the Offences against the Person Act 1861 (c. 100);
(7) A person guilty of an offence under this section of causing or allowing a person's death is liable on conviction on indictment to imprisonment for a term not exceeding 14 years or to a fine, or to both.

(8)  A person guilty of an offence under this section of causing or allowing a person to suffer serious physical harm  is liable on conviction on indictment to imprisonment for a term not exceeding 10 years or to a fine, or to both.

The 2012 Act is an example of a Private Member's Bill actually becoming law.   The Bill was introduced by Sir Paul Beresford (MP for Mole Valley) and received the support of the Ministry of Justice - (News Release).

The background to the 2004 Act is explained in an article by Richard Smith QC - "Which of you did it?"   As Smith pointed out, the situation which prosecutors used to face was problematic where it could be proved that one or more of a small group of people living in the same household as the victim caused the death of that victim, but not specifically which one of them.  The 2004 Act addressed this "prosecutor's dilemma" and the Act was successfully used in the Baby-P case.    The 2012 Act addresses the same dilemma in relation to cases where serious physical injury has been caused or allowed

The term "serious harm" is defined by the 2004 Act as harm that amounts to grievous bodily harm for the purposes of the Offences against the Person Act 1861.  For the purposes of the 1861 Act, the term "grievous bodily harm" has been held by the House of Lords to include psychiatric injury - (R v Burstow 1997 - House of Lords).   However, the amendments to the 2004 Act refer to "serious physical injury."


The 2004 and 2012 Acts make not just the deliberate inflicter of injury guilty.  It extends to those who assist and to those who merely stand by and do and say nothing.  As the Ministry of Justice's Press release indicated - "CPS data suggests there were more than 20 cases in 2010 where children and vulnerable adults have been seriously injured – broken bones, brain injuries – while their attacker has walked free."  Here is an attempt to stop this injustice.
Posted by ObiterJ at Saturday, March 10, 2012