Our legal heritage - No.2 - The formative period

It is no exaggeration to describe the turbulent period from Hastings (1066) to the end of the reign of Henry III (1272) as a formative period for English law, the courts and the system of government.  Of the eight Kings of this period, especially notable in a legal context were the reigns of Henry II (1154-1189), John (1199-1216) and Henry III when the beginnings of Parliament can be seen.  Early forms of "legislation" appeared albeit very different in style to modern legislation - for example the Constitutions of Clarendon 1164 and the Assizes of Clarendon (1166) and Northampton (1176).  The period also saw the first textbooks or "treatises" on English Law.  The King's courts of justice began to emerge from within the King's Council (or Curia Regis) and Judges begin to preside over cases.   People were summoned to give a decision about factual issues and from this process trial by jury developed and proved to be a popular alternative to older forms of trial such as the ordeal.  The earliest signs of a legal profession can also be detected.  Throughout this period there was endless political difficulty between the Kings and the powerful landowners including what became perhaps the most powerful landowner of all - the Church.  These early Kings laid claim to and administered extensive tracts of land including much of what is now France.

Henry II established the foundations of central power.  He exercised control over a vast land area (including much of France) and was indefatigable in his travels around his domains.

Originally, every man had his "peace" and it was a crime for another to break that peace.  Naturally, the King's Peace was the greatest of all.  Henry built upon this concept of the "Peace" which dated back to  Anglo-Saxon times and it was extended so that eventually it covered the entire country and any crime could be viewed as a breach of the King's Peace and therefore triable in the King's Courts.  The notion of the "Peace" survives to this day in matters such as arrest for breach of the peace and the power of Magistrates to Bind Over a person to Keep the Peace.

Litigants were attracted into the King's courts because
they began to offer a new form of trial based on the right in feudal law of the King to summon a body of men to bear witness under oath to any question.  At first these men were more akin to what modern law would call witnesses.  They testified from their personal knowledge of the question and gave a collective answer.  However, the practice developed of empanelling a "jury de circumstantibus" the members of which did not have personal knowledge of the facts of the case.  This was to develop into the modern form of impartial jury which hears both sides of the case and delivers a verdict.  Thus, trial by jury came to replace older forms of trial such as trial by battle (not formally abolished until 1818) and trial by ordeal (forbidden after the Fourth Lateran Council of 1215 Canon 19 of which forbade the blessing of water and hot iron for judicial tests).

Henry also developed the practice of sending out Itinerant Justices to try cases in the shires - sometimes referred to as the "Circuit" system.  From this the system of "Assizes" developed which survived until the Courts Act 1971 replaced them by the Crown Court of England and Wales.  Under the Assize Court system the judges went out under their Commissions of "Oyer and Terminer; Gaol Delivery" and the Commission of Assize ( for the hearing of civil matters).  Interestingly, the Bar still maintains a system of "Circuits" albeit modernised.

By the Constitutions of Clarendon 1164, Henry tried to force the Church to submit to the law of the nation as opposed to its own ecclesiastical law.  In this he was not entirely successful and the issue was to come to a climax almost 400 years later in the reign of Henry VIII (1509-1547).  The murder of Archbishop Thomas a Becket in December 1170 - (probably not intended by Henry II) - was one of the consequences of Henry II's struggle with the Church.

Further courts were to emerge from the Curia Regis - the Court of Common Pleas (late 12th and early 13th centuries), the Court of King' Bench (13th century).  The Courts of Exchequer; Common Pleas and King's (Queen's) Bench were the historic courts of common law.  A Court of Chancery came about in the 14th and 15th centuries and came to administer a system of law referred to as "Equity."  Equity did not supplant the common law but came to supplement it.   All of these courts had a long history and were ultimately merged into the High Court of Justice by the Judicature Acts 1873-75.  Their decisions, recorded for posterity by the law reporters, form the basis of our modern law and are still cited from time to time.

An important development occurred alongside the early days of the common law courts: the writ system.   In order to commence any action a writ was necessary.  The number of writs grew as the popularity of the King's courts grew.  Each writ came to have its own associated procedure adding complexity to the law. 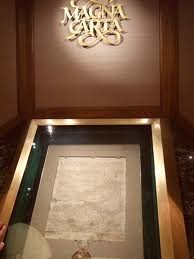 King John signed at Runnymede what has become one of the most famous pieces of "legislation" in the world: the Magna Carta of 1215.  This document symbolises the key point that the ruler should also be subject to the law.  The charter was akin to a contract between the King and the leading noblemen of the time who were more concerned with their feudal rights than actually granting liberties to the people.  Essentially, it was a practical solution to a political problem of the day in that it regulated aspects of the feudal system and limited the King's authority.  Over the subsequent centuries, the charter was destined to be seen as a fanfare for freedom from absolute rule and it has had influence way beyond what was originally intended.  After 1215, further versions of the Charter were produced and it is the 1297 version which remains on the statute book to this day.  Most of the original charter has now been repealed but the famous Article XXIX remains:

No Freeman shall be taken or imprisoned, or be disseised of his Freehold, or Liberties, or free Customs, or be outlawed, or exiled, or any other wise destroyed; nor will We not pass upon him, nor [condemn him,] but by lawful judgment of his Peers, or by the Law of the Land. We will sell to no man, we will not deny or defer to any man either Justice or Right.

The precise meaning of the word "freeman" is not entirely clear but, at the time of the Charter, probably signified those who were the King's major tenants - essentially the baronage.  See Salisbury Cathedral Magna Carta and also British library.  In modern times, all citizens can be regarded as "free."   The key element is that there must not be punishment without judgment according to law and, at least for criminal cases, the idea of "lawful judgment of his Peers" - the word "peers" meaning "equals" - has resonance in the jury system.  Historically, juries were used much more in civil cases which, in modern times, are almost entirely dealt with by judges sitting without juries.  However, in Crown Court trials, the jury system holds sway.  It is a moot point whether the idea of jury trial continues to hold the total attraction which it once had.  There have been attempts to remove it and a judge only trial is now possible in the Crown Court in limited circumstances (Criminal Justice Act 2003).  However this may be,  it is worth bearing in mind the famous statement by the late Lord Devlin (1905-1992) - "... the jury is the lamp which shows that freedom lives."

Henry III and Parliament  - It is in this period (1216 - 1272) that the word "Parliament" came into use - the first official use being in 1236.  Essentially, Parliament was then a kind of consultative meeting to which the King summoned his nobles.  The Parliament which met at Oxford in 1258 was notable in that the barons attempted to force Henry III to accept certain constraints which were set down in the Provisions of Oxford 1258.  The provisions included a Parliament being summoned at least three times yearly and called for 12 non-noble representatives to be summoned from the Counties.  Henry was not happy with this and war ensued.  At the Battle of Lewes 1264 Henry's forces were defeated by forces led by  Simon de Montfort (Earl of Leicester).  In 1265, de Montfort summoned his own Parliament but, at the Battle of Evesham he was killed by forces led by Henry's son Edward who was destined to become Edward I (reign 1272-1307).

Legal writers and law reports -many of the earliest sources of legal history come from this period.  The treatise of law by Glanvil is notable - "Tractatus de legibus et consuetudinibus Angliae" - (Treatise on the Law and Customs of England) - as a first statement in connected form of the law administered through the procedure of the Royal Courts.  A later treatise (c. 1256) of the same name is that of Bracton which was described by the historian Maitland as "the crown and flower of English medieval jurisprudence."   Bracton was one of the King's justices.  The work was written in Latin but attempted a scientific analysis of general principles.