Recruitment to the Judiciary

How are members of the judiciary selected and appointed? The answer to these questions may be seen in recent advertisements for judicial posts at all levels of the legal system.

The United Kingdom can pride itself on the fact that there is very little political influence in the judicial appointments processes. This is in marked contrast to nations such as the United States of America where, for example, appointments to the Supreme Court of the USA are made by the President subject to confirmation hearings in the Senate.

Recently, Amey Coney Barrett (48) was appointed via this process. The voting

was, with one exception, on political party lines - 52 to 48.  President Trump has now appointed three Associate Justices of the Supreme Court and numerous other judges at Federal and District level - Pew Research Center 15 July 2020.

In the UK, there have been some calls for greater political involvement in appointments to the senior judiciary. For all the beguiling arguments in its favour, I doubt it would be a wise development. However, in this post I do not intend to "drill down" into that question save to note that in nations with formal (codified / written) constitutions the highest courts usually have a significant role in the interpretation of the constitution and how it is to be applied to contemporaneous issues. The UK does not have a codified constitution and Parliament is always able to have the final word on the law.

A Justice of the Supreme Court:

The latest advertisement for a Justice of the Supreme Court is HERE with further information HERE. Obviously, this is a post at the apex of the legal system and the legal profession. The individual appointed will be able, through the court's judgments, to make a mark on our law.

"The UK Supreme Court and Judicial Committee of the Privy Council hear a wide range of very complex and high profile legal appeals, which can have considerable impact across the United Kingdom and beyond. The withdrawal of the UK from the EU makes this a particularly important time at which to be appointed a Justice.

All those appointed to the Court need to be people of truly exceptional intellectual and legal ability, with sound judgment and decisiveness. The selection commission is looking for candidates who can show an ability to contribute to the collegiate decision-making of the Court, a sensitivity to the needs of different communities and groups and an ability and willingness to engage in the wider representational and leadership role of a Justice, together with an appreciation of the developing nature of the constitution and law in England, Scotland, Northern Ireland and Wales. The Supreme Court is required by statute to have judges with a knowledge of, and experience of practice in, the law of each part of the United Kingdom." [My emphasis].

The qualifications for appointment and the selection process are set out in the Constitutional Reform Act 2005 (as amended by the Crime and Courts Act 2013). The Lord Chancellor convenes a Selection Commission. The steps undertaken by an independent selection commission are:

A more detailed description of the process is also available via the Supreme Court's website - Appointments of Justices section. The court may not have more than 12 justices.

The new appointee will take up office in the spring of 2021.

The Judicial Appointments Commission plays a central role in the appointments process for members of the professional judiciary.  See What the JAC does.

Candidates are recommended for offices such as the High Court, Upper Tribunals and all others listed in Schedule 14 of the Constitutional Reform Act 2005 , as amended by the Crime and Courts Act 2013.

The JAC is central to the appointments process for District Judges (Magistrates' Courts) and there is currently an advertisement for 25 such posts.

The JAC does not select magistrates or judicial office-holders for the UK Supreme Court.

Magistrates are non-professional members of the judiciary who agree to sit in court for (at least) a minimum number of sittings per year. England and Wales is unique in the considerable legal powers exercisable by magistrates.

In Northern Ireland, the Justice (Northern Ireland) Act 2002 made significant changes and introduced, from 1st April 2005, the new office of "Lay Magistrate."

In Scotland, there has been a system of JPs since 1609 and a system of "Justice of the Peace Courts" was created under the Criminal Proceedings etc (Reform)(Scotland) Act 2007.   This development came about in an interesting way.  The Scottish Ministers commissioned a "Summary Justice Review" and a majority of the review team recommended abolition of the office of JP.  However, there was a "Note of Dissent" by Sheriff Brian Lockhart and Mrs Helen G Murray JP.   The Scottish Parliament was persuaded by the dissenters and not only legislated to retain "lay justice" in Scotland but also created the Justice of the Peace Courts.  The former District Courts.were abolished.  It is worth noting here that the Note of Dissent remarked (at para 7) - "Lay justice is a powerful expression of community participation in the regulation of society."

For England and Wales, the loss of over 16,000 magistrates in a 12 year period is remarkable. What accounts for this fall in numbers?

In part, the answer lies in the extensive programme of court closures in recent years.

Serving as a magistrate has been one way in which public-spirited individuals have been able to give worthwhile service to their locality. For many, the reduction in the court estate has meant an unwelcome and lengthy journey to a court location. Further problems exist where a magistrate is employed and wishes to take time out of work to sit in court or to attend training. This is an obvious problem for the employer especially during times of economic difficulty.

District Judges are allocated work in accordance with the Criminal Procedure Directions for Listing and, in particular, see para D4 (Cases involving very large fines) and Annex 1 (cases with complex points of law or evidence or complex procedural issues etc). Some classes of case are said to "necessarily require DJ(MC)s" and these are extradition, terrorism, prison adjudication, sex cases in the Youth Court, large fines, and the "Special Jurisdiction of the Chief Magistrate."

Nonetheless, magistrates play a crucial role in their courts and will be involved in many trials and also sentencing of offenders. Magistrates also sit in the Youth Courts and have an important role in the Family Court.

The magistracy received a severe bashing in the book by Secret Barrister - "Stories of the Law and How It's Broken" - (Macmillan, 2018). In Chapter 3 it is said - " The truth is that the entire case in favour of Magistrates' Courts, as we currently run them, is a sham. There is little sustainable rationale for their existence in principle, and no justification whatsoever for the way in which these courts operate in practice ..."  Later (pg 69) we are told - " ... In what other area of public life do we allow amateurs to carry out the functions of qualified and regulated professionals? No one suggests that we keep education cheap by using volunteer teachers ..... but when it comes to criminal justice, we are happy to subcontract laypeople to perform a strictly legal function ...."

A more recent book, written by an experienced "inner city" lay magistrate, is simply entitled "The Secret Magistrate" - (Hawksmoor Publishing, 2020). The book offers a dispassionate view of the selection pricess for magistrates, the training the receive and how they discharge their duties.

A point which comes across strongly is that magistrates take a fair and serious approach combined with attention to detail when considering either questions of guilty / not guilty or deciding on the appropriate sentence for those convicted. The author offers plenty of evidence for this with numerous examples of cases which are the all too typical fare in the magistrates' courts.

The author does not shy away from the issues faced by the courts. The final Chapter (The Verdict) states - "The overwhelming majority of magistrates that I have either met or worked alongside are entirely fair, pragmatic, and open-minded, with a thirst for knowledge and improvement. Typically, magistrates have a well-developed sense of teamwork, broad life experiences, and - despite being under a great deal of time pressure - they make sensible and accurate decisions having first carefully assminilated and considered all the information thrown at them."

The writer continues - "What makes these achievements even more praiseworthy is that they have been accomplished whilst working, at times, with one hand seemingly tied behind our backs. We have had to come to terms with playing our part in a judicial system that is suffering death by a thousand cuts after an estimated 25% HMCTS budget decrease over the last decade. Cutting costs does not necessarily result in greater efficiency."

The Secret Magistrate calls for an overhaul of the training and appraisal system. "It is eye-opening as well as eye-watering to discover just how much the overall training budget has been cut for magistrates; this is at a time when the mantra seems to be less is more .... The Ministry of Justice urgently needs to increase funding to HMCTS ad the Judicial College to invest in improving the calibre of all magistrates."

Both books highlight crucial problems with the criminal justice system. My own plea would be for a proper review of legal aid for representation before courts, tribunals, and inquests. Law and procedure are difficult areas and nobody ought to be in the position of having to represent themselves before a court.

Magistrates are recruited by Advisory Committees - see Judiciary - "Becoming a Magistrate".  Recruitment Information and the areas currently recruiting are set out HERE.

Justice Committee Report 2016 - The role of the magistracy

Justice Committee 2019 - The role of the magistracy: follow up

UK Government October 2019 - Response to The Role of the Magistracy 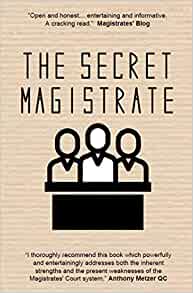