Amendment Regulations were made by the Secretary of State for Health and Social Care on 22 October and are mostly in force from Friday 23 October 2020. The Regulations move a number of areas into a higher coronavirus alert level. For example, Greater Manchester moved from Level 2 (High) to Level 3 (Very High).

Legislation for the 3 levels of alert:

A very helpful website is Kings Chambers - Living in Tier 3: Useful links and guidance for individuals and families and Useful links for business and The Latest Covid Regulations Practical Guidance

The Guardian 22 October 2020 reports that "Boris Johnson and his chief scientific adviser have admitted to failings in England’s £12bn test-and-trace system as contact-tracing fell to a new low and waiting times for test results soared to almost double the target."

Also in the political arena was a House of Commons vote on free school meals for disadvantaged children - see In Your Area - Find out how your MP voted. A motion to feed more than 1.4 million children during school breaks until Easter next year was voted down in Parliament on Wednesday evening. The bid, tabled by Labour, was defeated by 322 votes to 261 - a majority of 61.  See the Hansard record of the debate and voting.

It is reported that - "Scores of councils have pledged to feed disadvantaged children over the school holidays as they joined a wave of public support for a campaign led by the England and Manchester United footballer Marcus Rashford.

Amid growing outrage over the government’s refusal to extend free school meals in England next week, Conservative-controlled Kensington and Chelsea council and Birmingham city council, the UK’s biggest local authority, were among those stepping into the breach.

A groundswell of cafes, businesses, charities and community groups also said they would donate food during half-term next week and over the Christmas holidays, inspired by Rashford’s campaign to end child food poverty" - The Guardian 23 October 2020 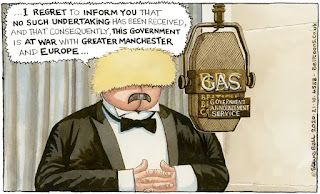