The Attorney-General's Office has announced that Stephen Yaxley-Lennon (aka "Tommy Robinson") has been found guilty of contempt of court following a trial held at the Old Bailey before Dame Victoria Sharp P (QBD) and Warby J.   Dame Victoria Sharp was appointed President of the Queen's Bench Division upon the retirement, at age 70, of Sir Brian Leveson.

The contempt proceedings have an interesting and quite lengthy history.

In April 2017, Kirklees Magistrates' Court sent a number of men, accused of serious sexual offending against young females, for trial
at the Crown Court - Huddersfield Examiner 12 April 2017.  The Crown Court decided that there would be three trials.   This was entirely sensible given that there were 29 defendants in total - Examiner 11 May 2017.

On 25 May 2018, the second of the three trials had reached the point where the jury had retired to consider verdicts. The third trial was fixed for a date later in 2018.

An obvious problem with holding separate trials is that reporting of an earlier trial or trials could prejudice the outcome of a later trial or trials.  For this reason, the Crown Court imposed a Postponement Order under the Contempt of Court Act 1981 s.4(2) - " ... the court may, where it appears to be necessary for avoiding a substantial risk of prejudice to the administration of justice in those proceedings, or in any other proceedings pending or imminent, order that the publication of any report of the proceedings, or any part of the proceedings, be postponed for such period as the court thinks necessary for that purpose."

On 25 May 2018, Mr Yaxley-Lennon (YL) decided to broadcast via Facebook Live from outside the Crown Court at Leeds.  His broadcast lasted for over an hour and took place as defendants in the second of the three trials arrived at court.   Finally, YL was arrested (actually for breach of the peace) and, the same day, was dealt with for the contempt by the trial judge His Honour Judge Marson QC.  YL was committed to prison for 13 months - 10 months for the conduct at Leeds and 3 months due to activation of a suspended term imposed at Canterbury in 2017.  The Canterbury judgment (Her Honour Judge Heather Norton QC) is HERE and YL was clearly warned that a further contempt of court would result in the suspended term being activated.  The May 2018 judgment of Judge Marson does not appear to have been published.

Counsel acting for some of the defendants in the second trial made an application to have the trial jury discharged but this was rejected by Judge Marson - The Independent 5 July 2019.

This previous post looked at the events at Leeds on 25 May 2018 and also took a general look at contempt of court.

The Court of Appeal remarked - para 83 - 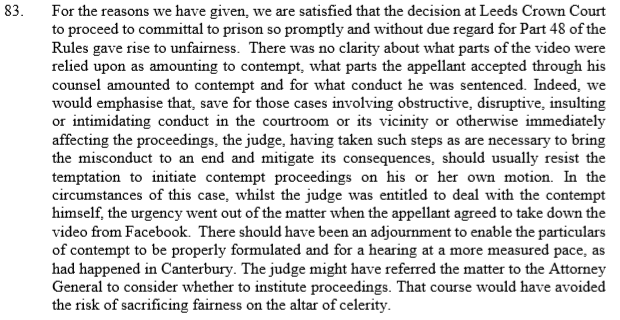 The judgment shows the importance which English law places on the need for courts to follow the correct procedure, no matter the individual(s) involved - see Keep Calm and Talk Law

Referred to the Attorney-General:

On 23 October 2018, YL attended the Old Bailey for the trial ordered by the Court of Appeal - previous post.  The trial was listed before the Recorder of London, His Honour Judge Nicholas Hilliard QC.  Counsel for YL submitted that the case should be referred to the Attorney-General who is able to bring contempt proceedings.  At such proceedings witnesses could be called.  The judge adjourned the case on that basis.

It was not until 7 March 2019 that the Attorney-General announced that there were grounds to bring fresh proceedings against YL and that it was in the public interest to do so.

YL stood trial at the Old Bailey on 4 and 5 June.  Contempt of Court proceedings are dealt with by judges without a jury.  YL was found guilty by Dame Victoria Sharp P (QBD) and Warby J.

The announcement from the Attorney-General's office notes that the Attorney General was granted permission to bring proceedings on the basis of:
The court indicated that it will give reasons for its decision and set a provisional date for sentencing of 11 July.

Protests took place outside the Old Bailey and, on Twitter, there was some irresponsible comment.  For example, Gerard Batten MEP posted - "An unbelievable verdict at the Old Bailey. Tommy Robinson found guilty on three counts of contempt of court. Sentencing next Thursday. This is a travesty of justice. A political verdict on trumped up charges. What kind of country are we now living in?"

Only the most uncritical admirers of the legal system can be content at the way in which this case has progressed but it has to be noted that the law of contempt exists to protect the administration of justice and a central feature of that is the right to a fair trial for ALL defendants. YL's actions on 25 May 2018 presented a serious risk to that and it is a type of conduct that ought to be condemned.

The High Court's reasons for finding against YL are published by the Judiciary Website - pdf 31 pages.

YL was sentenced to 6 months imprisonment in respect of the contempt at Leeds.  The Canterbury suspended sentence (3 months imprisonment) was activated in full.  Therefore 9 months in total.   See announcement from the Attorney-General.  The 10 weeks served previously will be taken into full account.  The outcome was 19 weeks imprisonment.  Release from this type of imprisonment is normally at the halfway point.

The court's reasons for sentence are published via Bailii

HM Solicitor General v Cox and Parker-Stokes [2016] EWHC 1241 (QB) - "The Solicitor General brings these committal proceedings against the respondents, Kyle Cox and Damien Parker-Stokes, with the permission of the Divisional Court, Irwin and Foskett JJ, granted on 20 October 2015. He seeks their committal to prison for taking photographs in court at Bristol Crown Court, including photographs of their friend, Ryan Sheppard, during his sentencing hearing for murder. Committal is also sought for their publishing some of the photographs on Facebook, a contempt aggravated by comments, variously supportive or worse, of Sheppard as he faced life imprisonment, critical of the acquitted co-defendant of Sheppard and of another female present at the murder scene, and derogatory towards a judge or the judiciary generally."
Posted by ObiterJ at Saturday, July 06, 2019