The famous former footballer Mr David Beckham has entered a not guilty plea to a charge of speeding on the A40 - ITV News - Sky News - BBC News - Manchester Evening News.  It is reported that he was driving at 59 mph in a 40 limit and that Mr Beckham is not denying the speed.  How then can he plead not guilty?

The answer lies in the Road Traffic Offenders Act 1988 section 1 which requires a Notice of Intended Prosecution (NIP) to be "served" within 14 days of the offence.*  The wording of section 1(1) makes it clear that there cannot be a conviction unless the requirement of service is complied with.

Section 1 also provides that - "The requirement of subsection (1) above shall in every case be deemed to have been complied with unless and until the contrary is proved."  Consequently, a defendant has the burden of proof if he seeks to argue that the NIP was not served in time.

What is service?   The most usual method of service is by first class post sent to the last known address of the registered keeper of the vehicle.  By the Interpretation Act 1978 section 7 , service is deemed to have been effected at the time at which the letter would be delivered in the ordinary course of post.

The Telegraph report indicates that the car - a Bentley - was on loan to Mr Beckham.  It is claimed that the NIP was not received by Bentley until a day after the law permits.

Going over the speed limit by any amount is an offence.  Police have tended not to prosecute in marginal cases though Anthony Bangham, the chief constable of West Mercia and the lead for the National Police Chiefs Council (NPCC) on road policing, called on police forces to end the practice of only prosecuting drivers who break the speed limit by more than 10%.  “The law is there for a reason ... we must enforce the law,” he told the Police Federation’s roads policing conference in Hinckley, Leicestershire - see The Guardian 31 January 2018

Speeding can sometimes attract a Fixed Penalty Notice - see the CPS Guidance for this.

Speeding is triable summarily (i.e. in the Magistrates' Court) and attracts a Level 3 fine (or Level 4 for motorways) - i.e. maximum £1,000 (or £2,500).  The court may disqualify the offender and endorsement of the licence is mandatory.  Magistrates' Court Sentencing Guidelines contain the following table: 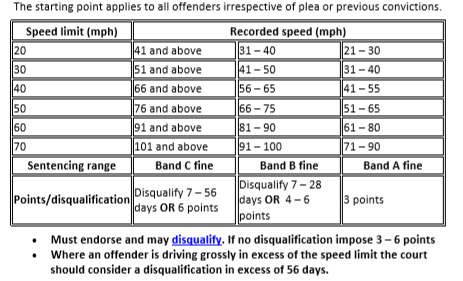 Conviction would also attract a so-called "Victim Surcharge" of 10% of the fine up to a maximum of £170.  Prosecution costs would also be payable.

*  A NIP is not always required - section 1 is "subject to section 2" and section 2 sets out two exceptions to the requirement for a NIP and there are also two situations where failure to comply with the requirement of section 1(1) of the Act is not a bar to the conviction of the accused.
Posted by ObiterJ at Wednesday, September 05, 2018