The UK will leave the European Union on 29th March 2019.  This is the effect of the notification given to the EU, in March 2017, under Article 50 of the Treaty on European Union.

An amendment to the Bill passed on Monday 30th April could have crucial impact if the Lords amendment survives the Commons.  The amendment inserted a new clause into the Bill which begins:

(1)    Without prejudice to any other statutory provision relating to the withdrawal agreement, Her Majesty’s Government may conclude such an agreement only if a draft has been - (a) approved by a resolution of the House of Commons,and (b) subject to the consideration of a motion in the House of Lords.


The Commons gets to vote on the draft withdrawal agreement and could accept or reject it.  The Lords get to consider the draft agreement but cannot reject it.

Suppose that the Commons was to reject the draft agreement.  The UK would still leave the EU but without any such agreement.  That is the inexorable impact of Article 50.

Hence, the impact of the amendment is that (1) no agreement can be concluded without the Commons voting in favour and the Lords having debated the draft agreement AND (2) Parliament has to approve the withdrawal agreement by Act of Parliament before it can be implemented in the UK.

There is even more "taking control" in the amendment.

The amendment will require the government to follow directions "in relation to the negotiations under Article 50(2)" when the direction has been approved by a resolution of the Commons and has been considered by the Lords.  This goes beyond the usual arrangements by which government undertakes treaty (agreement) negotiation.

this aspect of the amendment will not take effect unless one of three conditions arises:

a) Parliament has not approved a draft withdrawal agreement by 30 November 2018; or

b) an Act of Parliament approving the withdrawal agreement has not been passed by 31st January 2019; or

c) no withdrawal agreement has been reached by 28 February 2019.

So, the power to give directions to the government is intended to kick in if the situation arises where there is no Withdrawal Agreement.  (For instance, this could come about if problems concerning the border between the Republic of Ireland and Northern Ireland are not resolved).

Will the Commons reverse this?

The government will not be happy with the new clause and will wish to see it removed from the Bill.  In the event that the matter comes to a Commons vote it is not entirely easy to forecast the outcome given that the government has only a minimal majority and that there are MPs (on both sides of the House) who may not necessarily follow Party lines when voting.  Independent 1st May - Theresa May is playing a risky game by pledging to overturn the Lords' decision on Brexit.

Has the House of Lords overstepped the mark?

No doubt some will think that the Lords has gone too far in passing this amendment and the usual comments about "unelected Lords" have appeared along with further calls for abolition of the Lords.

In reality, the amendment enables Parliament, mainly the Commons, to make some key decisions BUT the primacy of the Commons has been preserved.  The amendment is clear about that.  The Lords may "suggest, argue, explain and enable" - (Viscount Hailsham in the debate).  The amendment seeks to increase the influence of Parliament (mainly the Commons) over the Brexit process but it does not prevent Brexit which, as already noted, occurs on 29th March 2019 irrespective of whether there is a withdrawal agreement or not.  To that end, the Lords has done a good job by passing the amendment. 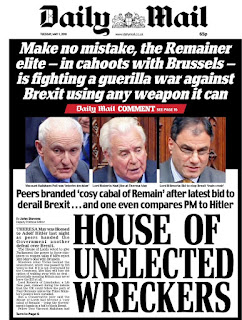 An overview of the progress in the House of Lords of the European Union (Withdrawal) Bill has been published by Parliament - HERE.
Posted by ObiterJ at Wednesday, May 02, 2018