There is some talk that the Secretary of State for Exiting the EU (Mr David Davis MP) might be in contempt of Parliament for failing to comply with the Humble Address of 1st November.

The Address stated: "That an humble Address be presented to Her Majesty, That she will be graciously pleased to give directions that the list of sectors analysed under the instruction of Her Majesty's Ministers, and referred to in the Answer of 26 June 2017 to Question 239, be laid before this House and that the impact assessments arising from those analyses be provided to the Committee on Exiting the European Union." (My emphasis).

The debate preceding the Address may be read at Exiting the EU: Sectoral Impact Assessments.   The Address refers to impact assessments even though, during the debate, the Minister (Mr Robin Walker - Parliamentary Under-Secretary of State for Exiting the EU) was at some pains to point out that the material was "sectoral analysis" rather than "impact assessments" - previous post of 8th November.

The Address is worded so as to require full and complete production of the material.  There are no exceptions in the Address relating to, for example, sensitive commercial material etc.  On 1st November, the government could have sought to amend the motion but did not do so.

A further debate on an Urgent Question was held on 7th November in which Mr Walker again set out the government's view about the material in question.  Mr Davis also sent a written statement to Parliament on 7th November in which he stated - " ... it is important to recognise in some cases there may be confidential or commercially sensitive information in this analysis, and that in many cases this analysis has been developed to underpin advice to ministers of the negotiation options in various scenarios. It is well understood (as was the case under successive administrations) that such advice to ministers must remain private."

According to this report in The Guardian 28th November, "Mr Davis has been told he could be in contempt of parliament after his department heavily edited government analyses on the impact of Brexit on 58 industrial sectors before handing them to a select committee.  Opposition MPs accused the Brexit secretary of leaving out “politically embarrassing” information after he refused to include anything deemed to be market sensitive or that he said could damage the UK’s negotiations with the EU27.  Davis said he was withholding the information because he had “received no assurances from the [Brexit] committee regarding how any information passed will be used”. But that triggered a furious reaction from MPs on the Brexit select committee who were supposed to be handed over the reports after a unanimous and binding vote of MPs. One option, they said, is to trigger contempt proceedings against the cabinet minister."

The BBC 27th November has included a letter of 27th November from Mr Davis to Mr Hilary Benn MP the Chairman of the Exiting the EU Committee. 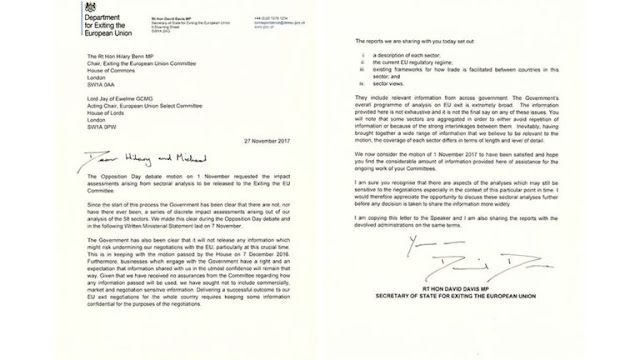 The letter expresses the view that the government considers the Address to have been satisfied but whether the House of Commons will agree with that may be another matter.


Contempts comprise any conduct (including words) which improperly interferes, or is intended or likely improperly to interfere, with the performance by either House of its functions, or the performance by a member or officer of the House of his duties as a member or officer.  The scope of contempt is broad, because the actions which may obstruct a House or one of its committees in the performance of their functions are diverse in character. Each House has the exclusive right to judge whether conduct amounts to improper interference and hence contempt. The categories of conduct constituting contempt are not closed.


Examples of contempt are then set out and include:

In the event that the House decides that there has been a contempt then what are the consequences?  The 1999 report gives some information at paras 271-273 and includes the statement that contempts by Members may be punished in the Commons by suspension (and loss of pay) for a period up to the end of the Parliament, and by expulsion.

I suppose that, apart from proceeding against a Member (and Ministers are members) for contempt, it would be open to the House of Commons to bring forward a Motion of No Confidence in the Government and,  if successful, that would trigger the process in the Fixed-Terms Parliaments Act 2011 section 2 which could result in a General Election though it does not inevitably do so.  That would be the nuclear option and, in present circumstances, the election would essentially be concerned with Brexit though it is not possible to confine a general election to any single issue.

Will the present messy situation come to this?  I rather doubt it though a serious row is brewing and a motion for contempt is a possibility.  More likely, the document disclosure issue will be sorted out by negotiation of some agreement by which the committee receives the material but disclosure beyond the committee is controlled.  An alternative would be for the government to ask the House of Commons to amend the Humble Address.

Parliament revisited the Parliamentary Privilege issue in 2013-14 - see the report.

The Exiting the EU Committee is to meet today (29th November).  The Committee's webpage contains links to the letter from Mr Davis to the Committee Chairman (Mr Hilary Benn MP) and the reply from Mr Benn.