House of Lords report on Article 50

The Committee says it would be 'constitutionally inappropriate' and would set 'a disturbing precedent' for the Government to act on the referendum without explicit parliamentary approval.

"The referendum result was clear. Parliament is now responsible for ensuring that the Government takes forward the complex process of negotiating the UK’s withdrawal from the European Union in a manner that achieves the best possible outcome for the UK as a whole. The focus must now be on how Parliament and the Government will work together to that end. That co-operation should start now. Parliament and the Government should, at this early stage, take the opportunity to establish their respective roles and how they will work together during the negotiation process. The constitutional roles of each—the Executive and the Legislature—must be respected, beginning with parliamentary involvement and assent for the invoking of Article 50."

On 13th September, the Secretary of State for Exiting the EU gave evidence to the House of Commons Foreign Affairs Committee.  Mr Davis maintained the view that the involvement of Parliament is not required in triggering Article 50 and thereby commencing the formal process of leaving the EU - Evening Standard 13th September.

On 12th September he gave evidence to the House of Lords EU Committee.

A detailed analysis of the Treaty provisions relating to leaving the EU is by Dr Philip Syrpis (of Bristol University).  Please see his article What next? An analysis of the EU law questions surrounding Article 50 TEU: Part One and also Part 2.

Further links on Brexit see - Brexit: Where are we now? 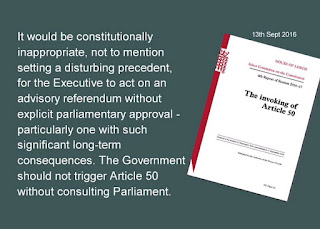