The EU Referendum vote in favour of Brexit will eventually require the dismantling of the complex relationship between the domestic law of the UK and the law of the EU.  This will not be a straightforward task and the difficulties should not be underestimated.  It is far from being a matter of simply repealing the European Communities Act 1972.

The ECA as originally enacted has been amended as necessary over the years and the modern European Union has developed - Timeline of the EU.

Events leading to the ECA 1972

The UK applied to join the European Economic Communities in 1967 and negotiations eventually began in October 1970.   The question of whether Britain should sign the Treaty of Accession was debated in the House of Commons in October 1971.  Domestic opinion was strongly against membership and there was considerable concern over whether the terms negotiated were good enough for Britain.  Doubts over many issues affecting Britain's future were aired in a debate that lasted six days.  Hansard for 28th October 1971 records that the House of Commons approved the following motion by 356 votes to 244.

"That this House approves Her Majesty's Government's decision of principle to join the European Communities on the basis of the arrangements which have been negotiated." 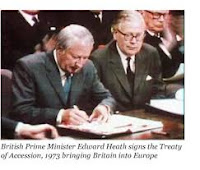 The signing of the Treaty of Rome did not have any immediate effect in the domestic legal systems of the UK because the UK has a dualist system with respect to Treaties.  This system requires Parliament to enact legislation in order to give legal effect in domestic law to a treaty.  A Bill, consisting of just 12 clauses, was introduced into Parliament.  Some 300 hours of debate followed before the Bill received Royal Assent on 17th October 1972 and became law as the European Communities Act 1972.  The government ratified the Treaties on 18th October 1972.  There was no referendum even though it was known that public opinion was, generally, either hostile or uncertain.  See BBC - A short history of UK referendums.

Note: Following the "LEAVE" vote in the 2016 European Union Referendum, there has not (as yet) been any extensive debate in Parliament let alone approval of any decision to leave.*

The general implementation of the EU Treaties is the purpose of section 2 of the European Communities Act 1972.

A further form of EU legislation is the DIRECTIVE.  A directive is binding, as to the result to be achieved, upon each Member State to which it is addressed, but it is left to national authorities to choose the form and method of implementation.  The ECA 1972 section 2(2) contains a power for the making of national legislation or the purpose of implementing any EU obligation of the United Kingdom etc.

The central importance of the ECA 1972 is clear since, without this Act, neither the EU Treaties nor other EU legislation would have effect in the domestic legal systems of the United Kingdom.  The Act is therefore a means by which EU law flows into the UK.  The EU institutions create EU law and it becomes part of domestic law because of the mechanisms in the ECA 1972.

In the 43 years and 8 months since 1st January 1973, the ECA 1972 has enabled a mass of EU-related legislation to take effect in domestic law.  One consequence of Brexit is that ALL of this legislation will eventually need to be identified but, with appropriate resources, that ought not to be beyond the wit of government lawyers though there can be no doubting the difficulty!

Having identified the legislation it will be necessary to decide, for each item of this legislation, whether it can be abandoned or whether it offers something of value to the UK that ought to be retained in domestic law.  Some of those decisions will depend on whatever the on-going UK-EU relationship is to be and that will not be fully known until the conclusion of the negotiations which will commence in earnest when the UK gives notice (under Article 50) of a decision to leave.

As to what may be retained, the political climate at Westminster is also likely to play a significant part. Some decisions will be politically controversial such as whether workplace rights will be retained where such rights have their origins in EU law.  On this see University of Bristol - Worker's Rights- Opinion of Michael Ford QC.

A Repeal of the European Communities Act Bill will eventually be required.  It would provide for the cessation of direct applicability within the UK of the Treaties and EU Regulations and would presumably remove the ability for Ministers to implement Directives.  The Act would also have to remove the procedure by which UK courts may (sometimes must) make a reference to the Court of Justice of the EU on questions of EU law.  The Repeal Bill is likely to give Ministers powers to amend or remove EU-based law and there seems little doubt that this would be achieved via Secondary Legislation most of which receives minimal parliamentary scrutiny.  Transitional provisions will abound!


All of this points to a lengthy and difficult process eventually leading to Brexit.  The difficulties - both legal and political - should not be underestimated.