21st November 1974 is another day that should live in criminal infamy.  Two explosions in Birmingham wrecked the Mulberry Bush and the Tavern in the Town.  21 people were killed and 182 injured.  A third explosive device failed to detonate.  Six men - (Hugh Callaghan, Patrick Joseph Hill, Gerard Hunter, Richard McIlkenny, William Power and John Walker) - were arrested and subsequently tried in the Shire Hall of Lancaster Castle (pictured) before Bridge J and a jury.  The trial commenced on 9th June 1975 and the men, having been convicted, were sentenced on 15th August 1975.  Bridge J rejected legal argument to the effect that the men's statements ought not to be admitted in evidence.  The statements were later shown to be unreliable.  It was not until 14th March 1991 that the convictions were finally quashed by the Court of Appeal (Criminal Division).  Financial compensation was subsequently paid.  Bridge J went on to eventually become Lord Bridge of Harwich and he sat in the Appellate Committee of the House of Lords from 1980 until 1992.

The Birmingham Six case, as it came to be known, has resulted in extensive literature including the book by Chris Mullins - "Error of Judgment: The truth about the Birmingham Bombings" - (see London Review of Books) and Chris Mullins' own comments about his book).

In the book "Justice in Error" (eds. Clive Walker and Keir Starmer - Blackstone Press, 1993), Barrister James Wood looked at the summing up by Bridge J,  Wood noted - "Although legally correct in every respect, Mr Justice Bridge brought his authority to bear upon the jury so as to ensure the outcome he clearly desired.  He reassured the jury of the quality of the advocacy they had heard; he informed the jury that (in their absence) he had heard all the evidence about the confessions and decided that it was admissible; he made his view plain that the defence forensic expert (Dr Black) was 'theorising'.  Similarly, when dealing with the confession evidence he said of Dr Harwood - (who had testified as to the accused's injuries) - ' ... can you believe a word of what Dr Harwood says? and then labelled him as a possible pejurer.  Lastly, he tried to make it sound outrageous that, as alleged by the defence, the police had conspired to deceive and fabricate evidence.  'If the defendants are giving you honest and substantially accurate evidence, there is no escape from the fact that the police are involved in a conspiracy to commit a variety of crimes which must be unprecedented in the annals of British criminal history.'

The case eventually reached the Court of Appeal (Criminal Division) in 1987 but the appeal was dismissed.  At the second, and final, reference in 1991, it was the concession of the prosecution rather than insight from the court that made the outcome certain.  Thus, the court indicated at a preliminary hearing that it would not be spoiling Christmas by looking at the papers and so securing an early release.

The Royal Commission on Criminal Justice:

The Birmingham Six case led to the setting up of a Royal Commission on Criminal Justice.  When setting up the Royal Commission, the Home Secretary (Mr Kenneth Baker) stressed the need to address the issues raised by the Birmingham Six case and to minimise the possibility of other miscarriages occurring.  There was widespread expectation that the Commission would fundamentally reappraise the structures of criminal justice.  Some of the features leading to miscarriages included: false confessions, failure by the Police or Prosecution to disclose to the defence exculpatory material and questionable forensic science.  Also, there was also a widespread perception that the Court of Appeal needed to be more ready to acknowledge that errors had occurred.

The Commission eventually reported on 21st June 1991 and made 352 recommendations (summarised in Chapter 12).

The Commission wanted research into the reasons why juries reached their verdicts; questioning of suspects after charge; and various additional safeguards for suspects.

A majority of the Commission believed that adverse inferences should NOT be drawn from silence at the police station but inferences could be drawn once the prosecution case had been fully disclosed.

A judicial warning was proposed in relation to confession evidence and the jury warned to take great care of convicting on the basis of the confession alone.

The Commission recommended removing the defendant's right to choose the mode of trial in either-way cases and to leave this decision entirely up to the Magistrate (after consultation with CPS and defence lawyers).   In fact, Commission's proposal would have meant that where the defence and prosecution lawyers were in agreement about mode of trial the Magistrates would have had no decision to make!

The abolition of "old-style" committal proceedings was proposed but a defendant could argue before trial that there was no case to answer and have that considered 'on the papers' by a Crown Court judge or a Stipendiary Magistrate (but not a bench of JPs).  [Perhaps an early sign of the desire to change the judiciary in the Magistrates' Court from the JPs to the professionally qualified Stipendiary].

The Commission had a great deal to say about disclosure by both the prosecution and the defence and all but one of the Commission (Professor Michael Zander QC) favoured an extension of the arrangements for defence disclosure.

The admissibility of evidence relating to any previous convictions of a defendant should not be too restrictive and the Commission asked that the Law Commission examine this as part of a recommendation to review the law of evidence.

There was a considerable amount in the report relating to Forensic Science with a recommendation to set up a Forensic Science Council to report to the Home Secretary on the performance, achievements and efficiency of the forensic science laboratories.

Further recommendations addressed the role of the Court of Appeal and included replacing the grounds of appeal with a single broad ground of whether the conviction 'is or may be unsafe.'

A further very significant recommendation was to set up a Review Authority with power to refer cases to the Court of Appeal and to remove the power of the Home Secretary (Criminal Appeal Act 1968 s17) to so refer cases.  This latter recommendation was very broadly welcomed at the time -  The Independent 7th July 1993

The report had what was, to my mind, a significant dissenting voice in 3 areas.  Professor Zander QC dissented on defence disclosure which, he argued, was wrong in principle and would also cause extra delay, cost and inefficiency - to little purpose.  There was a more detailed dissent relating to pre-trial procedures. In relation to appeals, Zander pointed out that a majority on the Commission favoured allowing the Court of Appeal to dismiss an appeal in cases where there was sufficient sound evidence BUT where there was also serious misconduct by the Police or prosecution.  Zander argued that the moral foundation of the criminal justice system required that such appeals be allowed and the convictions quashed.

It is not possible in a blog post to consider the mass of subsequent legislation affecting criminal justice.   The process of change continues inexorably.  Suffice here to make just a few points.

The confidentiality of the jury remains and this prohibits "jury research": Contempt of Court Act 1981 s.8

The "right to silence" remains - at least in legal theory - but is heavily circumscribed by the provisions of the Criminal Justice and Public Order Act 1994 sections 34-39.  In securing the enactment of this Act, the government largely adopted legislation from Northern Ireland which had been in force for some years - (the Criminal Evidence (Northern Ireland) Order 1988).

Committal proceedings took a long time to die but they are now a footnote in legal history having been replaced by a "sending procedure" - Crime and Disorder Act 1998 s51 and Criminal Justice Act 2003 s.41 and Schedule 3.  See also this Judicial College material.

Disclosure in criminal cases is covered by the Criminal Procedure and Investigations Act 1996 (as amended) most notably as amended by the Criminal Justice Act 2003 Part 5 which replaced the core provisions of the scheme.  There is little doubt that disclosure has lengthened the overall timescale of cases and added costs.  However, criticism is nowadays appears to be directed at the detail of the disclosure processes rather than at the principle itself.

The Criminal Justice Act 2003 Part 11 made major changes to the law of evidence and, in particular, in relation to admissibility of hearsay evidence and character evidence (including bad character).  It seems fair to say that a defendant today who has a bad character (e.g. previous convictions) is much more likely to find them revealed to the jury than was the case in the past where, essentially, the defendant had a shield protecting him against such admission though there were exceptions to this.

The recent coalition government made major changes to the arrangements for forensic science.  Today, a Forensic Science Regulator is tasked with ensuring appropriate scientific quality standards.   In 2011, the Law Commission recommended changes relating to handling of expert evidence and the Lord Chief Justice spoke about this in October 2014.

Amendments to the law relating to appeals came with the Criminal Appeal Act 1995.  The modern ground for quashing an appeal is that the court considers the conviction to be unsafe - see 1995 Act section 2.

The Criminal Cases Review Commission was set up by the Criminal Appeal Act 1995 Part 2.

The serious miscarriage of justice cases of the 1960s to 1980s are fading into history and a whole generation of practitioners are now operating within the untidy and complex system as it is.  They would do well to study the various cases and note how things went wrong, often with very serious consequences.

It would, in my view, be quite wrong to become complacent and think that injustice cannot occur today.  Much of the reform over the last 20 years or so has been concerned with procedure rather than the substantive law itself and there are areas where the substantive law is considered to be working injustice.  For example, a very serious argument can be made for reform of the substantive law on "joint enterprise" in criminal cases and, in particular, the aspect of joint enterprise coming within the decision of the Privy Council in Chan Wing-Siu (1984)..

Those who have suffered a miscarriage of justice may not always receive compensation under the present day law.  The government has no desire to be generous to them.  Under the Antisocial Behaviour, Crime and Policing Act 2014 section 175, in cases of newly discovered evidence,  compensation will only be payable if the new evidence shows beyond reasonable doubt that the person did not commit the offence.

Today there is greater emphasis on the victims of crime - e.g. CPS Code of Practice for Victims of Crime.  There were over 200 victims of the Birmingham bombs and no further charges have ever been brought. It seems unlikely that they ever will be - Express and Star 40 years on and no justice for the Birmingham pub bombing victims. 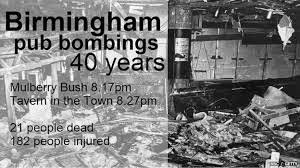