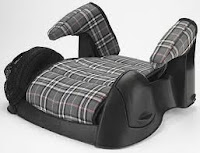 At the outset of reading this, please jot down the height (in centimetres) and the weight (in kilograms) of each of your young children or grandchildren.  If you use either child seats or booster seats in your car then answer honestly these questions: "Did you read thoroughly the instructions supplied when you bought the seat?"  "Did you definitely comply with the instructions the last time your child was in the car?"

There are many types of child car seats designed for children of certain age ranges, weights and heights:  rearward facing baby seats; forward facing child seats; booster seats and cushions.  Reading the manufacturer's instructions is essential and, for safety reasons, so is compliance with them.

The Court of Appeal (Civil Division) - Arden, Elias and Black LJJ has just given judgment in Louise Emma Williams v The Estate of Dayne Joshua Williams [2013] EWCA Civ 455.
A collision occurred between a car driven by Dayne Williams and a car driven by Louise Williams.  (The parties were not related).  The collision was caused entirely by the driving of 18 year old Dayne Williams who had consumed alcohol and illegal drugs. He lost control, swerved across the road and hit the car driven by Ms. Williams.  He was killed.

Emma Williams - then aged 3 yrs 2 mths - was a passenger in the car driven by Ms Williams.  Emma was sitting in the back on a booster seat, strapped in with the adult seat belt.  Emma's seat did not have back support. She was badly injured.

The estate of Dayne Williams accepted liability to Emma but claimed that Ms Williams should be held liable to contribute because she was negligent in putting Emma on a booster seat rather than in the other available child seat in the car which had a 5-point harness.

Such contribution claims arise under the Civil Liability (Contribution) Act 1978.  The trial judge (Blair J), applying the Court of Appeal decision in Froom v Butcher [1976] 1 QB 296, ordered that Ms Williams was liable to make a contribution of 25% of the damages payable to Emma.  Ms Williams appealed against the 25% finding but it was upheld by the Court of Appeal.
The court looked at the manufacturer's instructions for use of the seat on which Emma had been sat.   There were 5 qualifications for use of the seat and the manufacturer stipulated that ALL had to be complied with.  Emma met 3 of the 5.  She was within the weight stipulation and the position of her ears in relation to the vehicle seat was correct as was positioning of the seat belt.  However, at 93 cms in  height, she was not as tall as specified (101 to 145 cm in height) and, at 3 years and 2 months old, she was 10 months younger than the approximately 4 years of age that was contemplated.

These facts were crucial in this case.  Although the court said that compliance with manufacturer's instructions was not necessarily determinative, this is clearly a key factor.  Non-compliance will make it all the more difficult to counter a claim of negligence.

The case is interesting for the range of arguments advanced to the effect that Blair J was wrong to find Ms Williams negligent but these were rejected - [paras. 17-49].   Also, it is interesting to note that, as the law stood at the time of the collision, Emma could have been strapped in using an ordinary adult seat belt [50].    Furthermore, arguments were put that the amount of contribution had been set too high.  Again, this was rejected with the Court of Appeal noting that Froom v Butcher had stood the test of time - see, for example, Stanton v Collinson [2010] EWCA Civ 81.   The Court of Appeal said - [57] - ' .... it is important to remind ourselves that the [court] will only interfere with an apportionment of liability such as Blair J made "where it is clearly wrong or there has been an error in principle or a mistake of fact"

It is worth noting that behind this case will have been insurers.  The insurers of Dayne Williams were seeking contribution from the insurers of Ms Williams.  However, dependent on the facts of a particular case, the potential remains that a child's damages could end up being reduced.