The ceremonial funeral of Baroness Thatcher is to take place in London on Wednesday 17th April - see No. 10 Downing Street.  The armed forces have held a rehearsal and Police activity is being managed - Metropolitan Police statement  and  Operation True Blue.

Plans for ceremonial funerals are certainly not made on the spur of the moment.  The idea of a ceremonial funeral for Lady Thatcher originated from Prime Minister Gordon Brown and arguments against holding such an event were put forward - for example, by Peter Oborne writing in  The Telegraph December 2011.   It did not need any great foresight to see that this funeral would be highly controversial and that public order problems were likely.

This funeral will have been meticulously planned (with the Police involved in the planning).  However, what does public order law say about processions?

In most instances, the Public Order Act 1986 s.11 (POA86) requires advance notice to be given to the Police for processions.  There are some exceptions such as processions commonly or customarily held in the police area (or areas) in which it is proposed to be held or funeral processions organised by a funeral director acting in the normal course of his business.  Basically, 6 days notice must be given to the Police of plans to hold a procession and the Police are entitled to impose conditions - see POA 86 s.12.    (See also section 13 for circumstances in which the Police may ask a local authority to prohibit processions).  These are considerable powers.

It is reported that some people watching the funeral, will turn their backs on the cortege and that the Police have given 'go ahead' for this - The Guardian 14th April.   The Police are reported to have warned about the possible use of  Public  Order Act 1986 s.5.  An article in The Independent 15th April suggests that Police may actually take a tougher line and use section 5 extensively.

Of course, 'facing away' can be a powerfully symbolic way of expressing disapproval.  To my mind, it should not be done on this occasion.  Whatever one's political views, Lady Thatcher exemplified a remarkable thing about our system in that a person with the right ability, whatever their origins, can rise to high office.  I hope that this will always be possible.

There is an irony that the Public Order Act 1986 was enacted in the wake of the Miner's Strike though the Act was a reform of public order law which the Law Commission put forward in connection with their plans to codify the criminal law.  Section 5 has, at times, proved to be problematic:

Would 'facing away' be a possible offence under section 5?  To so conclude, it would be necessary to interpret the conduct as, at least, 'insulting' in the context of this funeral.  Also, the conduct has to be in the hearing or sight of a person likely to be caused harassment, alarm or distress thereby.  I suppose that it is possible (just about) for some Magistrates' Court to hold that 'facing away' would result in an offence under section 5 and, it should be noted, that it is NOT a requirement of the Act that the conduct in question leads to any violence.  However, I would argue that such an interpretation would be utterly inconsistent with Article 10 of the European Convention on Human Rights - Freedom of Expression.

In January, the government indicated that they would not oppose a Lords amendment to the Crime and Courts Bill which will remove the word insulting from section 5.  (See Clause 38 of the Crime and Courts Bill as it was when it came to the House of Commons).  Of course, for the time being, the word insulting remains in the POA86.  A useful document discussing section 5 may be read via Parliament - Briefing Papers - Public Order Offences

The eyes of much of the free world and perhaps beyond will be on London this Wednesday and it is to be hoped that the event passes with dignity.

Admiral of the Fleet The Earl Mountbatten of Burma - 1979

The funeral took place in London on 17th April with only minimal protest and, such protest as took place, was non-violent.  Many people watched the cortege on its way from Parliament to St. Clement Dane and then to St. Paul's Cathedral.

Lying here, she is one of us, subject to the common destiny of all human beings.

There is an important place for debating policies and legacy; for assessing the impact of political decisions on the everyday lives of individuals and communities. Parliament held a frank debate last week – but here and today is neither the time nor the place. This, at Lady Thatcher's personal request, is a funeral service, not a memorial service with the customary eulogies.

And at such a time, the parson should not aspire to the judgments which are proper to the politician; instead, this is a place for ordinary human compassion of the kind that is reconciling. It is also the place for the simple truths which transcend political debate. And above all it is the place for hope. 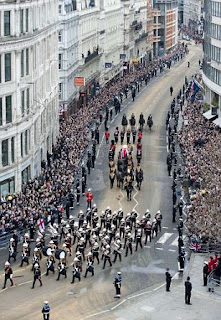