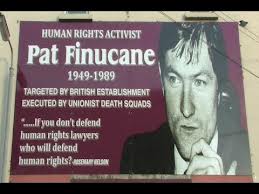 Patrick Finucane and his wife Geraldine were the parents of three children. He was a solicitor practising in Belfast. Like many in the legal profession he appeared in high profile cases that were often controversial. He acted frequently for those who were alleged to be members of the Irish Republican Army (IRA) or the Provisional Irish Republican Army (PIRA) when they were charged with terrorist offences. Yet he also acted for Protestants in similar situations. There can be little doubt that it was his role as a solicitor that led to his murder  which took place in February 1989.


In October 2011, the Rt. Hon. Sir Desmond de Silva PC QC was requested by the Secretary of State for Northern Ireland (Mr Owen Paterson MP) to review aspects of this murder.  Sir Desmond's brief was:


Drawing from the extensive investigations that have already taken place, to produce a full public account of any involvement by the Army, the Royal Ulster Constabulary, the Security Service or other UK Government body in the murder of Patrick Finucane.

The Review will have full access to the Stevens archive and all Government papers, including any Ministry of Defence, Security Service, Home Office, Cabinet Office, or Northern Ireland Office files that you believe are relevant. The account should be provided to the Secretary of   State for Northern Ireland by December 2012, for the purpose of publication.


Sir Desmond has issued his report - available HERE.  The statement of the Prime Minister to Parliament is available via the Parliament website or BBC 12th December 2012.  The Prime Minister has requested Ministers to report back to him regarding any lessons which can be learned and he said that the responses would be published.

The report does not pull any punches.  Whilst it was not for Sir Desmond to make specific recommendations, he offered some lessons for the future - (paras. 109-113).

"Perhaps the most obvious and significant lesson of all, however, is that it should not take over 23 years to properly examine, unravel and publish a full account of collusion in the murder of a solicitor that took place in the United Kingdom."

There were different views as to what amounted to "collusion" between State authorities and others.  Sir Desmond adopted the definition used by Lord MacLean in the Billy Wright Inquiry Report and not the wider definition adopted by Canadian judge Peter de Carteret Cory in his Collusion Inquiry Report.  Nevertheless, Sir Desmond stated:

" ..... , even by reference to that narrower definition, it is clear for the reasons I outline in this Report that the threshold for a finding of collusion is met in this case."

Sir Desmond was left "in significant doubt as to whether Patrick Finucane would have been murdered by the UDA in February 1989 had it not been for the different strands of involvement by elements of the State. The significance is not so much, as Sir John Stevens concluded in 2003, that the murder could have been prevented, though I entirely concur with this finding. The real importance, in my view, is that a series of positive actions by employees of the State actively furthered and facilitated his murder and that, in the aftermath of the murder, there was a relentless attempt to defeat the ends of justice."

Sir Desmond had no doubt that "that agents of the State were involved in carrying out serious violations of human rights up to and including murder. However, despite the different strands of involvement by elements of the State, I am satisfied that they were not linked to an over-arching State conspiracy to murder Patrick Finucane. Nevertheless, each of the facets of the collusion that were manifest in his case - the passage of information from members of the security forces to the UDA, the failure to act on threat intelligence, the participation of State agents in the murder and the subsequent failure to investigate and arrest key members of the West Belfast UDA - can each be explained by the wider thematic issues which I have examined as part of this Review."

In spite of the gravity of Sir Desmond's findings, he said

"it would be a serious mistake for this Report to be used to promote or reinforce a particular narrative of any of the groups involved in the Troubles in Northern Ireland. My remit has, by its nature, involved only an examination of the actions of the British State and its agents, and loyalist terrorist organisations. I have no doubt, however, that PIRA was the single greatest source of violence during this period and that a holistic account of events of the late 1980s in Northern Ireland would reveal the full calculating brutality of that terrorist group. The abiding impression of this period in Northern Ireland must be of an extremely dark and violent time in which a lawyer could so callously and tragically be murdered as a result of discharging his professional legal duties."

Patrick Finucane's widow remains critical of the report and considers that it is a "sanitised report."  She argues that the government simply do not wish the train of command to be exposed.  Video of her interview in The Telegraph 12th December.

Sir Desmond's review certainly falls short of a full Inquiry which some continue to demand into this case.  However, in 2005, Geraldine Finucane urged judges to shun an inquiry if held under the Inquiries Act 2005 - see The Guardian 14th April 2005.

The 2005 Act has been the subject of severe criticism from Lord Saville who argued that the Act made "a very serious inroad into the independence of any inquiry; and is likely to damage or destroy public confidence in the inquiry and its findings, especially in any case where the conduct of the authorities may be in question."

Judge Cory was even more vociferous and said - "It seems to me that the proposed new act would make a meaningful inquiry impossible. The minister, the actions of whose ministry was to be reviewed by the public inquiry, would have the authority to thwart the efforts of the inquiry at every step .............. If the new act were to be come law, I would advise all Canadian judges to decline an appointment in light of the impossible situation they would be facing. In fact, I cannot contemplate any self-respecting Canadian judge accepting an appointment to an inquiry constituted under the new proposed act."

The Inquiries Act 2005 replaced the Tribunals of Inquiry (Evidence) Act 1921.  The 2005 Act was enacted as part of the so-called "wash-up" process just prior to the 2005 general election.  On "Wash up" see Parliament Briefing Paper and also the House of Lords Library Note - Wash up: Bills receiving Royal Assent 1987-2005.

In the light of the Prime Minister's statement to the House of Commons (12/12/12) it seems that a further inquiry is unlikely.  Cameron argued that such an inquiry was not likely to produce a fuller picture though it is reasonable to consider that this view is not entirely convincing.  In January 2012, the Finucane family were granted a judicial review of the government's decision not to hold an inquiry.  The final word may yet rest with the courts.

"Nor should a lawyer be judged by the client he represents. Those untrained in the law all too often identify lawyers with their clients and consider them to be a party to the offence. Those who have studied law are aware that it is often the role, and indeed the duty, of counsel to act for an unpopular client. This must be the rule. Otherwise, unpopular but innocent individuals, who because of suspicious circumstances desperately need the services of able counsel, would be without representation."  From the  Report on Collusion by Judge Cory - 1st April 2004 at para. 1.13

For barristers, this view is reflected in the Bar Standards Board - HANDBOOK - (the so-called Cab-Rank rule).  The rule reflects very long standing practice at the Bar.