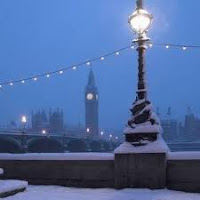 Snow has arrived over most of the U.K. which is caught between a deep low pressure region over eastern Europe and a high pressure region out in the Atlantic Ocean.  This brings easterly / north-easterly winds which are invariably cold and the snow which comes with them is dry and large amounts can fall.

The "big" political story of the week has been about "Wikileaks" revealing the contents of thousands of diplomatic communications - see The Guardian 29th November "US Embassy Cables: A banquet of secrets."  .One matter revealed concerns what appears to be the US attitude to a request made by Gordon Brown when he was Prime Minister relating to Gary McKinnon who is wanted by the US for alleged "computer hacking" - Guardian 30th November.  At the heart of the case is the almost unbelievably unbalanced Extradition Act 2003 . There have been repeated calls for amendment of this Act so that it works on the same basis whichever way the extradition is to take place - see The Spectator 30th July 2009.  It beggars belief that any British government or any U.K. Parliament could have permitted such biased legislation to get on to the statute book.

The North London Coroner (Mr Andrew Walker) has rejected argument that he should now hold an inquest into the death of "Baby P" - The Independent 30th November.  The Coroner stated that all questions have already been answered by previous investigations by State agencies.  The Coroner is also reported as stating that even if he was wrong about the criteria for an inquest being met, a "coroner's inquest is not the best forum for such an inquiry."   [One is then tempted to ask - well why do we have inquests?]  The Baby P case is a tragic example of abysmal "parenting" coupled with failures by the Local Authority Social Services to detect and deal promptly with concerns - see BBC 26th October 2010.  The two Serious Case Review reports are available on the Department of Education website.

Peter Sutcliffe (labelled "The Yorkshire Ripper") is to have his case heard by the Court of Appeal.  He is arguing that he should not have to serve the "whole life tariff" as set by the High Court in July 2010.  He was convicted in 1981 of the murders of 13 women in West Yorkshire in the period October 1975 to November 1980.  He pleaded guilty to the attempted murders of 7 others.  The trial judge - Boreham J - recommended that Sutlciffe serve 30 years.  See the judgment of the High Court in July 2010 and also Law and Lawyers March 2010.

Addendum 1st December 2010:  Former Home Secretary David Blunkett has spoken about the Extradition Act 2003 - see The Guardian 1st December.  However, as far as one can see, he is not acknowledging the central criticism that the Act operates in an unbalanced way in relation to the USA.
Posted by ObiterJ at Tuesday, November 30, 2010